Strong second quarter
Second-quarter revenues at Santarus, Inc. (NASDAQ:SNTS) grew 89% year-over-year to $89.4 million. Part of that growth was due to the return of immediate release heartburn drug Zegerid, which had sales of $21.6 million and a year-over-year growth of 110%.

Santarus announced in September that an appeals court ruled in its favor regarding a patent fight over generic Zegerid from Par Pharmaceutical. Par began selling its generics in 2010, but the overturn allowed Santarus, Inc. (NASDAQ:SNTS)’ Zegerid to make a strong return to market.

Zegerid was second only to Glumetza in sales for the quarter. The type 2 diabetes treatment had sales of $44.4 million and a growth of 39%. The other pre-existing drugs were diabetes drug Cyclocet with $4.3 million sales and growth of 115%, and cholesterol drug Fenoglide, which had the sole growth loss of 5% down to $2 million.

So Zegerid and Glumetza clearly hold the greatest importance for Santarus, Inc. (NASDAQ:SNTS). And now they’ve been joined by the new ulcerative colitis drug Uceris.

Uceris after launch
Uceris received Food and Drug Administration approval in January for the remission of mild to moderate ulcerative colitis — a potentially serious inflammatory bowel disease.  Mild to moderate UC is often treated with corticosteroids, which are plentiful on the market. But while Uceris is a corticosteroid, the drug offers fewer side effect symptoms. And that’s a major selling point considering that many patients have difficulties when taking that class of drugs.

The drug launched in February and has managed a steady start. The first-quarter report featured $6.6 million in net Uceris product sales. Total weekly prescriptions for the drug reached nearly 700 by mid-April. Sales reached $16.2 million in the recently reported second quarter. Total prescriptions for that quarter were approximately 11,528.

Note that Uceris dosing happens over 8-week periods, though the regimen can repeat if the patient isn’t sufficiently treated. So the prescription numbers keep growing even though some patients have likely finished a full course of treatment.

Santarus, Inc. (NASDAQ:SNTS) has growth plans in place for Uceris. The company will add an additional 85 sales reps before year’s end to help Uceris reach more doctors and patients next year. And there’s indication expansion trials under way for microscopic colitis and pediatric ulcerative colitis.

The pipeline
The most advanced pipeline candidate is Ruconest for hereditary angioedema, or HAE — a genetic swelling condition that can lead to fatal constriction of the airways. Ruconest received an orphan drug designation from the FDA  and should have an approval decision by April 16.

Phase 3 trials are under way for Rifamycin SV MMX — a treatment for intestinal infections and a globetrotting condition called travelers’ diarrhea, And the pipeline is finished off with rheumatoid arthritis project SAN-300, which will initiate phase 2 trials near the end of this year.

Here’s a closer look at the trio, measuring their total return compared to the S&P 500. 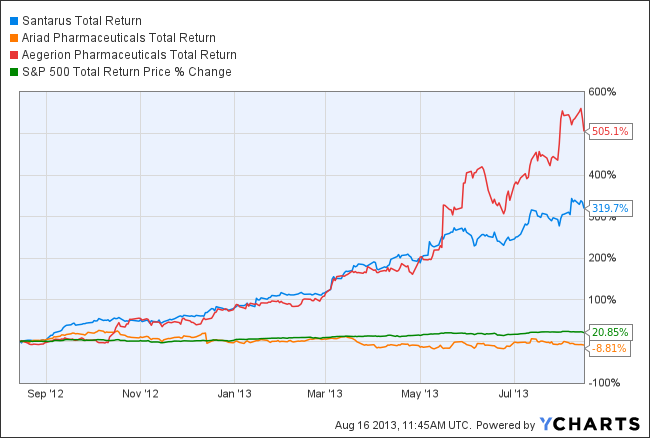 Foolish final thoughts
Santarus seems fairly valued at this time. The large growth over the past year was powered by the strong return of Zegerid, the launch of a new drug, and Santarus’ second quarter beating expectations. Santarus could run into some trouble in a couple of years when Zegerid and Glumetza head for the patent cliff, but there’s still time to adjust for that inevitability.

The article Did a Strong New Drug Make This Biotech Overvalued? originally appeared on Fool.com and is written by Brandy Betz.