For a prominent company that’s frequently in the news, Research In Motion Ltd (NASDAQ:BBRY) is one of the most misunderstood stocks in the market today. Too much attention focuses on the company’s past missteps — which allowed Apple Inc. (NASDAQ:AAPL) and Google Inc (NASDAQ:GOOG) to rapidly overtake it — rather than BlackBerry’s future prospects. Similarly, now that the new BB10 OS has come to market, too many people are focusing on the success or failure of the Z10 (Research In Motion Ltd (NASDAQ:BBRY) In Motion’s first BB10 device) rather than the ecosystem’s overall potential.

To be “successful,” the Z10 would need to sell perhaps 2 million units per quarter — just a tiny fraction of Apple Inc. (NASDAQ:AAPL)’s iPhone sales or Samsung Electronics Co., Ltd. (KRX:005930)‘s Galaxy S series sales. However, even that level of sales is not necessary to justify a higher valuation for BlackBerry, because the Z10 is just a small part of Research In Motion’s future. The much more important Q10 smartphone — equipped with BlackBerry’s signature QWERTY keyboard — is just hitting the market now. Furthermore, Research In Motion CEO Thorsten Heins has already revealed that lower-cost BB10 smartphones will come to market later this year, probably in the fall. Extremely low market expectations and a strong product roadmap will most likely combine to generate strong returns for Research In Motion investors.

Cheap stock
The investment case for Research In Motion is straightforward. First — and most obviously — the stock trades for $15, which is below book value. In other words, the company is priced to never earn a profit in the future and eventually go bankrupt. This is a big change from 2011, when the stock peaked above $70, or 2008, when Research In Motion shares briefly traded for more than $140: 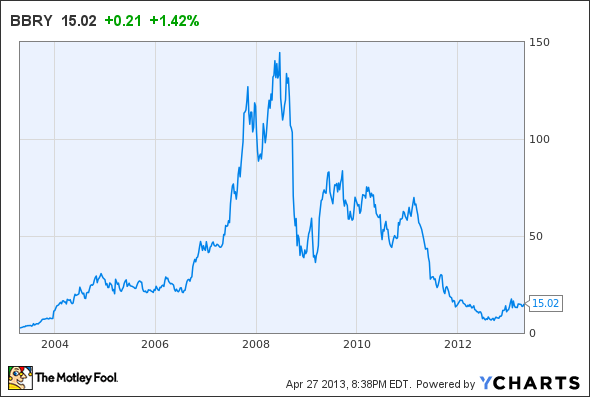 To put it another way, for the past year, investors have been able to buy BlackBerry stock at prices that had not been seen since the company was a small start-up.

Great product
Second, Research In Motion has a competitive product again. The BB10 operating system is great for multitasking and includes several unique features that may appeal to current iPhone or Android users. Many people already claim that iOS is getting stale and that Apple Inc. (NASDAQ:AAPL) has lost its touch for innovation since Steve Jobs passed away. More recently, Samsung’s Galaxy S4 has underwhelmed many reviewers, who see it as a great phone, but not a big improvement over the SIII.

We may use your email to send marketing emails about our services. Click here to read our privacy policy.
Related Insider Monkey Articles
Microsoft Corporation (MSFT)’s Windows 8: Three Ways It Can Be Saved