Renaissance Technologies is one of the most successful hedge funds in recent history if not the most successful, with founder Jim Simons’ net worth estimated at over $10 billion. We track 13F filings from hedge funds such as Renaissance in our database, which we use to develop investment strategies; for example, we have found that the most popular small cap stocks among hedge funds earn an average excess return of 18 percentage points per year (read more about imitating small cap picks). We can also see what Renaissance owns in a number of different categories, including stocks with high dividend yields. Here are five stocks paying yields of 3.5% or higher (judging by current prices and recent dividend policy) which the fund had at least $120 million invested in at the end of December (or see the full list of Renaissance’s stock picks):

One of the fund’s top picks was Intel Corporation (NASDAQ:INTC), with Renaissance reporting a position of close to 20 million shares. While the technology company does pay a dividend yield of over 4%, we would be a bit concerned about the stability of its business: in the fourth quarter of 2012, sales fell slightly versus a year earlier contributing to a 27% decline in earnings. If financial performance continues to be poor due to trends in personal computing, lower cash flows could lead to dividend cuts. Intel does offer attractive multiples at 10 times both its trailing and forward earnings. 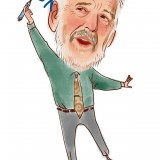 Renaissance cut its stake in Eli Lilly & Co. (NYSE:LLY) by 11% but still had 8.1 million shares in its portfolio at the end of December. At a market capitalization of $62 billion, the pharmaceutical company trades at 16 times trailing earnings. It also pays a dividend yield of 3.5%, and as might be expected for a drug manufacturer its beta is fairly low at 0.4 making it a potential defensive pick. We would note that its business has also not been doing particularly well, and in fact analyst expectations imply a decline in earnings over the next couple years.

Philip Morris International Inc. (NYSE:PM) was another of Renaissance’s favorite stocks with the filing disclosing ownership of 4.7 million shares. Billionaire Ken Fisher’s Fisher Asset Management was another major shareholder in Philip Morris (find Fisher’s favorite stocks), which markets cigarettes in international markets while sibling company Altria sells Philip Morris products in the U.S. The stock pays a dividend yield of 3.7%, below that of some other cigarette companies, but the international operations would in theory provide better growth prospects. Net income did in fact grow 11% last quarter compared to the fourth quarter of 2011.

Here another cigarette company and another drug manufacturer that Renaissance liked:

The 13F reported that the fund had 1.3 million shares of fellow cigarette company Lorillard Inc. (NYSE:LO) in its portfolio at the beginning of January, down slightly from three months earlier. With Lorillard’s business being more mature on average, it pays a considerably higher dividend yield than Philip Morris (at 5.5%) and has a lower beta at 0.4. So it is a strong candidate for income or defensive investors. In addition, it is arguably a value stock given its trailing and forward P/E multiples of 14 and 12 respectively.

Renaissance owned 2.9 million shares of GlaxoSmithKline plc (NYSE:GSK) at the end of 2012. GlaxoSmithKline has the most generous yield of the companies on this list, at 5.9%, and as a drug manufacturer it too is moderately well insulated from macro conditions. However, it has also been reporting weak financials recently and so we would need to look more closely at the company before buying rather than focusing entirely on the dividend payments.

We’d be a bit concerned about the recent results at the pharmaceutical companies, though GlaxoSmithKline’s yield is high enough that income investors should look into the business anyway. The cigarette manufacturers look a bit better, with Lorillard in particular offering an attractive combination of income and value. With Intel we are concerned about the business and even though the valuation is low we think it would be best to see a quarter or two of more stable performance before considering a position.

This Metric Says You Are Smart to Buy Genpact Limited (NYSE:G)
Monthly Newsletter Strategy
Download a free copy of our newsletter and see the details inside!
Hedge Fund Resource Center
Billionaire Hedge Funds