Formerly the biggest maker of solar panels in the world, with more than 10,000 employees, China-based Suntech Power Holdings Co., Ltd. (ADR) (NYSE:STP) has witnessed a long fall from grace. The nail in the coffin came in March, when the company failed to pay a $513 million debt obligation. Shortly following its default, the company sailed into Chinese bankruptcy protection. Fast-forward to this week and the company is trading more than 30% higher on a 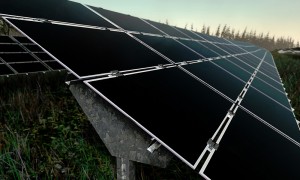 largely speculative rumor that Warren Buffett is looking to buy it.

This was enough to send the stock up more than 30% in Tuesday’s trading, with not a single official comment to be found.

I can’t say this definitely won’t happen, because I (along with nearly everyone else) just don’t know, but I honestly can’t imagine Warren Buffett (or Todd Combs, or Tedd Weschler) liking this business at all.

The Buffett checklist
Many analysts cite Buffett’s checklist (that doesn’t exist in any static form) for buying companies when trying to determine where his cash stash will strike next. How would Suntech fair if we hadn’t heard this rumor? Poorly.

The company operates in an industry that is incredibly lumpy with sharp shifts in demand and commodity-like competition. At the moment, there is a huge oversupply of solar panels, which is why manufacturers have gotten murdered in the markets. Management wasn’t able to effectively handle the company’s finances, and poorly leveraged its former position as market leader. The company is riddled with debt, has no moat, and operates in competition with another Buffett investment. The only thing that would be appealing is that its dirt cheap.

To be fair, the industry is showing signs of improvement. Another China-based manufacturer, Trina Solar Limited (ADR) (NYSE:TSL), announced that it is targeting a return to profitability in the back half of this year. American firm First Solar, Inc. (NASDAQ:FSLR) soared this week on similar news. But does any of this suggest that Buffett would want to own one of these businesses?

Solar farming
Buffett already owns solar farms, and these are the types of businesses that make sense as they guarantee predictable, steady cash flows over a long period of time. They aren’t affected by the swinging demand for panels, and they aren’t at risk of constant technological disruption.

Berkshire has its solar exposure, and its in the better part of the business. What would Suntech contribute to the company’s portfolio?
Stay away
Plainly said, do not buy this rumor. Even if it is anywhere close to being true, and I am proved to be not as smart as Buffett (spoiler alert), you would be speculating, and that’s not a good habit to reinforce.