The Royal Bank of Scotland Group plc (NYSE:RBS) introduced five new exchange traded notes (“ETNs”) on November 15.  The new ETNS are based on “enhanced” versions of Rogers International Commodity Indexes (“RICI”).  The underlying indexes were developed by RBS and Jim Rogers in October 2007 and have been maintained on a daily basis the past five years.

These “enhanced” indexes provide exposure to futures contracts with varying maturities and seek to maximize returns when there are significant price differences between near-dated and future-dated commodity contracts (contango and backwardation).  A special rollover calendar is defined for each commodity to address certain conditions such as term structure, seasonality, and liquidity.

Jim Rogers and an RBS representative constitute the two-person Index Committee, which annually reviews and adjusts the composition and weightings of the underlying indexes.  Annual weightings are determined based on the expected global demand of each commodity and are rebalanced twice a year.

Each ETN’s performance will be reduced by an investor fee, which is deducted at an annualized rate of 0.95%.  Additional information is available in the combined prospectus (pdf), including the performance comparisons below. 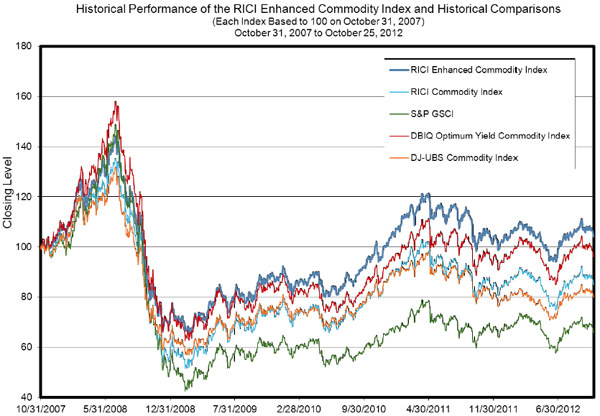 Analysis/Opinion: The most puzzling question about these products is “why did RBS wait five years to release them?”  The underlying indexes, which were jointly developed by Jim Rogers and RBS, became available in October 2007.  That happened to be the same month that ELEMENTS introduced Rogers Commodity ETNs based on non-enhanced RICI indexes and a lower 0.75% investor fee.

If the enhanced versions perform as expected, then investors should easily recover the 0.20% higher fees for the RBS ETNs.  This could also entice ELEMENTS shareholders to migrate to the new RBS RICI ETNs.  With more than 93% of ELEMENTS assets in the four ETNs above, large scale departures would likely place the entire ELEMENTS complex on ETF Deathwatch.