I’m sure you’ve heard the saying, “things are not always what they seem.” That’s what we have with RadioShack Corporation (NYSE:RSH). As a value investor, I’ve wanted to love this stock for a couple of years now; it’s constantly showing up on net-net screens, it’s in the news as a “dead” company, and rival Best Buy Co., Inc. (NYSE:BBY) has managed one of the great turnaround stories in retail.

The two, Best Buy Co., Inc. (NYSE:BBY) and RadioShack Corporation (NYSE:RSH), appeared to be in similar death spirals, and then 2013 came, transforming Best Buy into a new company. 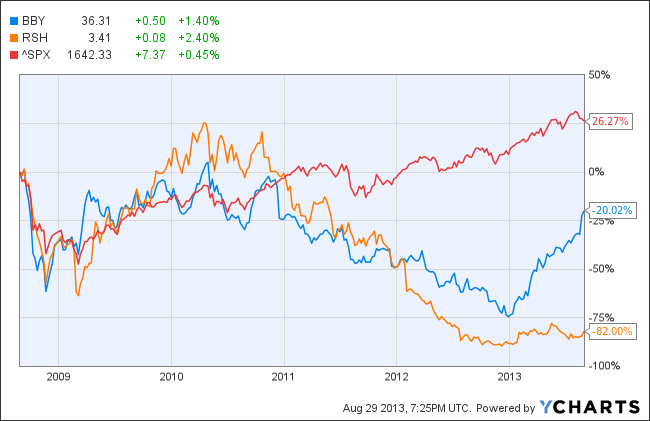 I am still a bit skeptical of the 200% run up in Best Buy Co., Inc. (NYSE:BBY)’s stock year to date. But the question remains, why can’t RadioShack Corporation (NYSE:RSH) do the same? All of this has led me to do some deep thinking as it relates to electronics, books, and e-commerce.

Amazon.com, Inc. (NASDAQ:AMZN) has forever changed the book industry. It’s doing the same with electronics. Amazon has soared, while the book and electronics retailers have suffered over the past decade. 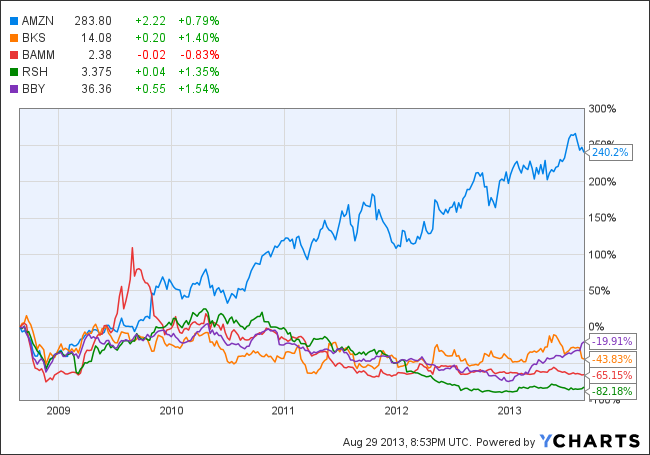 First, Amazon.com, Inc. (NASDAQ:AMZN) started offering the ability to buy books for cheap online. Then came the ability to read books online and via tablets/e-readers. Now the book industry is struggling to survive. Borders went bankrupt back in 2011, and Books-A-Million has seen its EPS fall from $1.88 in 2005 to a $0.26 loss in fiscal 2013.

I can see the parallels in the electronics industry. Circuit City closed its doors back in 2008, and now RadioShack Corporation (NYSE:RSH) and Best Buy Co., Inc. (NYSE:BBY) are left to battle it out in the electronics-retail industry. RadioShack has seen a similar decline to Books-A-Million, with EPS dropping from $2.08 in 2004 to a loss of $2.06 over the trailing 12 months.

But back to why RadioShack Corporation (NYSE:RSH) can be deceiving. The stock trades around $4.00, but it has $4.33 in cash per share on the balance sheet. Its debt, however, is a tough pill for investors to swallow, with nearly $7.20 per share in debt.

On the other hand, Best Buy Co., Inc. (NYSE:BBY) may be able to continue muddling through, as it did manage to generate $2.5 billion in free cash flow during fiscal 2012. But RadioShack has negative free cash flow of $111 million and suspended its dividend payment back in 2012. And RadioShack’s debt-to-equity ratio is 140%, while Best Buy’s is 46%.

So Amazon.com, Inc. (NASDAQ:AMZN) is killing the Best Buy-RadioShack model by selling laptops and TVs, but there’s another problem on the horizon: smartphone saturation. Both Best Buy and RadioShack get around 50% of revenue from the smartphone market. ComScore believes that 60% of Americans already have a smartphone. And as UBS telecom analyst John Hodulik has famously said:  “Everybody has got a smartphone.”

Yet, the likes of RadioShack and Best Buy are still focusing on smartphones, with Best Buy rolling out small mobile stores. A focus on low-margin smartphones should put further downward pressure on margins. Margins have been on the downhill slide, with Best Buy’s operating margin going from 5.4% in 2008 to 4.5% in 2010, and then 2.1% in fiscal 2012. The same is true for RadioShack; its operating margin went from 7.6% in 2008 to -2.7% over the trailing-12 months.