Plum Creek Timber Co. Inc. (NYSE:PCL), one of the largest private timberland owners in the U.S., is down some 10.5% over the past month, which is well above the 2.5% pullback in the S&P 500. Now appears to be a great time to buy this market-leading timber REIT.

Plum Creek Timber Co. Inc. (NYSE:PCL) is one of the largest private owners of timberland in the U.S., owning some 6.6 million acres of timberland in 19 states and offering investors an impressive 3.9% dividend yield.

The real tailwinds for the stock should be a rebounding housing market. S&P expects housing starts to surpass 1 million in 2013 and then reach 1.3 million units in 2014. The timber grown and processed by the major timber REITs is a fundamental input in home building.

What makes Plum Creek Timber Co. Inc. (NYSE:PCL) a great pick is that unlike its peers (mentioned later), the REIT has a heavy weighting toward wood products and real estate. Its timber operations account for nearly 50% of revenue, with real estate operations at 25%.

Plum Creek Timber Co. Inc. (NYSE:PCL) has been under-performing its major peers over the past five years. 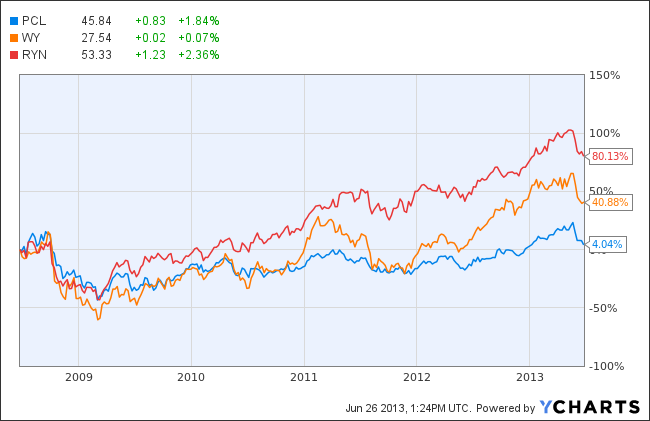 I believe this has been due in large part to Plum Creek Timber Co. Inc. (NYSE:PCL)’s enviable exposure to the real estate industry, which, until now, has been a negative for the company. As a result, I think Plum Creek is the best industry-pick going forward.

Plum Creek also has impressive value in its land holdings. The REIT plans to develop over 70,000 acres of land over the next decade and a half. This should come as timber prices rise thanks to the increasing demand in the housing markets.

Although Rayonier Inc. (NYSE:RYN) is a timber REIT, it appears to have less exposure to the overall housing boom. The REIT gets 70% of revenue from fibers, which makes products used in acetate textile fibers, photographic film, impact-resistant packaging, cigarette filters and food products.

Earlier this year, Rayonier Inc. (NYSE:RYN) sold off its woods-products segment to International Forest Products, which goes hand-in-hand with the REIT’s strategy of shifting its manufacturing operations to specialty chemicals. Although Rayonier is still considered a timber REIT, I think its over reliance on the fibers segment makes it an unattractive play on housing. Rayonier Inc. (NYSE:RYN) also pays the lowest dividend yield of the major timber REITs at 3.3%.

Weyerhaeuser Company (NYSE:WY)’s wood-products segment is the revenue workhorse, generating over 40% of revenue, while the cellulose-fibers segment generates only 26% of revenue. Timberland (15% of revenue) and real estate (15%) round out the remaining parts of Weyerhaeuser’s revenue.

Big news of late for Weyerhaeuser Company (NYSE:WY) includes its big purchase of Longview Timber for $2.6 billion. This is one of the largest North America forestry acquisitions in recent history. The deal will add 645,000 acres of timberland in Washington state and Oregon to Weyerhaeuser Company (NYSE:WY)’s portfolio and is expected to be immediately accretive to funds for distribution.

The Weyerhaueser-Longview deal is the third-largest acquisition over the past 15 years behind only Resource Management Service’s $5 billion purchase of International Paper’s assets in 2006, and Plum Creek’s $3.3 billion acquisition of Georgia-Pacific in 2001.