Sales of carbonated drinks have been softening, due to increased health awareness by consumers in developed markets. However, PepsiCo has also focused on fast growing non-carbonated soft drinks. The company’s innovation in the area has been successful with the introduction of Aquafina, Gatorade and Propel, Lipton teas and Tropicana.

Future earnings growth could also come from synergies associated with the acquisitions of its bottlers, streamlining of operations and cost cutting. The distribution networks of the bottlers acquired could be used to push some of PepsiCo’s non-beverage products such as snacks and other foods. Earnings growth could also come from other strategic acquisitions, as well as product innovations in health and wellness food and beverage section.

The annual dividend payment has increased by 10.60% per year over the past decade, which is higher than the growth in EPS. 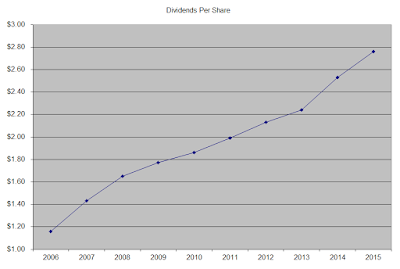 In the past decade, the dividend payout ratio increased from 34.70% in 2006 to a little over 75% in 2015. As we mentioned above, this ratio looks abnormally high due to earnings per share being depressed from a one-time charge. Without this one-time charge, this payout ratio should be under the 60% sustainable ratio I am looking for in a company. A lower payout is always a plus, since it leaves room for consistent dividend growth minimizing the impact of short-term fluctuations in earnings. 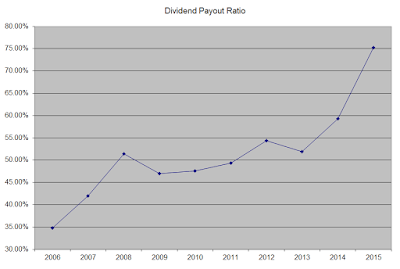 The return on equity largely remained between 30% and 40% over the past decade. The decline since 2010 was caused by the acquisition of Pepsi Bottling interests in North America, which require more capital than your regular soda syrup operations. I generally like seeing a high return on equity, which is also relatively stable over time. 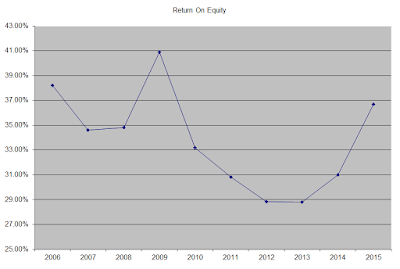 Currently, the company is overvalued at 21.70 times forward earnings and yields 2.90%. It is slightly cheaper than Coca-Cola, which sells for 23.40 times forward earnings and has a current yield of 3.10%. The pure play on North American soda is Dr. Pepper Snapple is cheaper at 21.80 times forward earnings and a current yield of 2.20%. I like PepsiCo, but it is selling at the highest point I would be willing to put money at. As a result, I would likely not put money there, unless valuation gets better. However, I do like PepsiCo, and find it to be one of the quality dividend paying cornerstones of my dividend portfolio. Thus, I plan on holding on to this dividend machine, and eagerly wait for drops in the stock price below $94/share.