Coal remains unloved because it is considered a dirty fuel. However, changes in the market are beginning to alter the fuel’s outlook for the better. It’s time to rethink the industry.

Markets are guided by a so-called invisible hand in which reasonably rational individuals do what is in their own best interests. In the end, supply and demand come together to create a working ecosystem. That’s happening to coal in spades.

New methods of drilling for natural gas overtook demand for the fuel and led to a steep price decline. That led utilities, the largest users of coal, to switch to gas as a fuel source to keep costs down. Coal demand and pricing fell as a result. The coal industry reduced production and refined operations as a result.

Natural gas prices, however, were so low that drillers couldn’t make money drilling. Natural gas drilling has, thus, slowed. That has pushed gas prices notably higher to the point where the choice between coal and gas as a base load fuel is no longer tilted in favor of gas.

The invisible hand is an incredible thing. And there are other long-term positives for coal, too.

Peabody Energy Corporation (NYSE:BTU) recently noted that it expects new coal fired power plants built around the world to increase coal demand by 1.4 billion tonnes by 2017. However, that positive is offset by the fear of U.S. government regulation forcing older domestic plants to shutter. Only Arch Coal Inc (NYSE:ACI) highlights that U.S. coal fired power plants operated at 73% of capacity in 2007, but at just 54% last year. So, any closures could easily be made up by demand from increased utilization.

Increased utilization is a price issue as utilities look for the lowest cost fuel source. Coal and natural gas will continue to vie for market share, but the negative trends in coal appear to be abating. And it looks like a few solid long-term positives are lining up. Now is the time to start looking at coal, even though 2013 could be another difficult year.

Peabody Energy Corporation (NYSE:BTU) is one of the largest U.S. coal miners, but it has a global profile. Notably, it has operations in Australia which allow it to easily provide coal to Asia. Coal demand in China and India is increasing rapidly, so this is a key long-term benefit.

The company remained solidly profitable until 2012, when profits fell dramatically. However, the loss is largely the result of one-time costs, including non-cash asset impairment charges. Without those charges, the company would have earned over $2.60 per share. This explains why, despite the difficult year, the company didn’t cut its dividend. As the coal market improves, Peabody Energy Corporation (NYSE:BTU) is well positioned to take advantage of the recovery.

It offers a yield of around 1.80%, relatively low on an absolute basis, but high for Peabody Energy Corporation (NYSE:BTU).

Arch Coal Inc (NYSE:ACI) is another large U.S. coal producer. It doesn’t have the global assets of Peabody Energy Corporation (NYSE:BTU), but is working to expand its ability to export coal from the United States to the countries where demand is increasing most quickly.

Like Peabody Energy Corporation (NYSE:BTU), Arch Coal Inc (NYSE:ACI) had been solidly profitable until 2012 when it posted a steep loss. However, that was directly related to a non-cash impairment charge of $231 million “due to the decline in benchmark metallurgical coal prices versus 2011.” While the company still lost money for the year even after removing the one-time charges, it has plenty of financial liquidity.

The company’s yield is around 2.30%, but the tough market led to a large dividend cut. That’s a notable risk, but also provides potential upside for income seekers. As results improve, the dividend here is more likely to ratchet higher than at Peabody.

CONSOL Energy Inc. (NYSE:CNX) is a good middle ground for investors who don’t want to bet too heavily on coal as natural gas becomes an increasingly important fuel source. The company is a major coal producer, but also has notable natural gas operations, too.

That’s been a major benefit through the difficult pricing period for coal, allowing CONSOL Energy Inc. (NYSE:CNX) to remain profitable in 2012. The company also managed to increase its dividend slightly last year, which shows the strength of its dual commodity focus. The recent yield was around 1.40%. However, unlike Peabody and Arch, the shares haven’t traded lower this year. So, the turnaround appeal on a coal rebound is notably reduced. 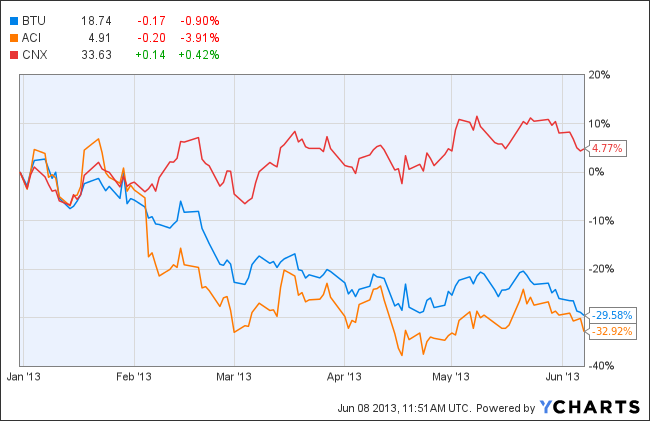 Coal is being treated like it is never going to be used again. That’s simply not true and there are some good options in the space for more aggressive investors. Peabody Energy Corporation (NYSE:BTU) is the most globally diversified option, Arch Coal Inc (NYSE:ACI)’s dividend cut could provide upside to its yield on a coal recovery, and CONSOL Energy Inc. (NYSE:CNX) is a safe punt option because of its gas assets.

The article Now Is the Time to Focus on Coal Companies originally appeared on Fool.com and is written by Reuben Brewer.