Is this going to be eBay Inc (NASDAQ:EBAY)‘s year — again? After over a decade of living in the shadow of e-tail giant Amazon.com, Inc. (NASDAQ:AMZN), the perennial second-place sales site is starting to get a bigger slice of attention from Wall Street and the tech press.

And why not? For the first time in years, second-place eBay is taking first place in the race for returns:

But what’s behind this change in fortunes? Maybe it’s because investors are realizing that a triple-digit P/E can’t stand up for years and years. Maybe it’s because PayPal is really the next big thing in payments. Or maybe, as a Wired piece published this morning suggests, eBay is taking control of the booming mobile e-commerce market. Wired suggests that eBay is capturing mindshare (and market share) in a number of critical emerging markets. It also suggests that eBay’s total sales and payment processing volume will nearly triple by 2015, to $300 billion from the $175 billion in sales reported last year. Is that enough to get excited over? Let’s see how eBay really stacks up: 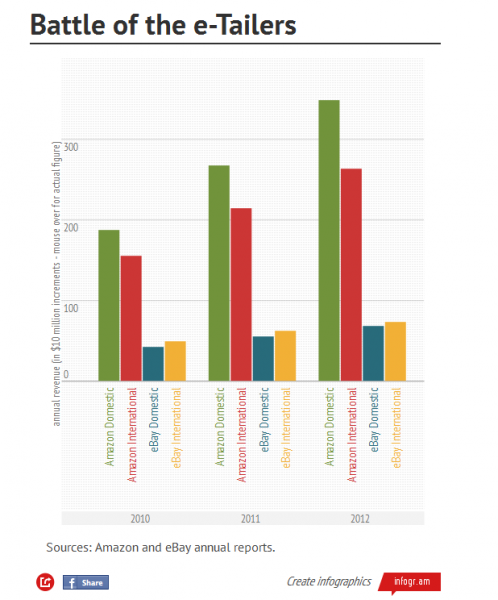 Battle of the e-Tailers | Infographics

It’s clear that eBay relies more on international sales than Amazon.com, Inc. (NASDAQ:AMZN), but is it worth the excitement when Amazon is so much larger on both accounts? This only shows raw revenue, so I’ve taken these figures and calculated year-over-year growth rates. It looks better for eBay, but it’s not enough to tilt the scales: 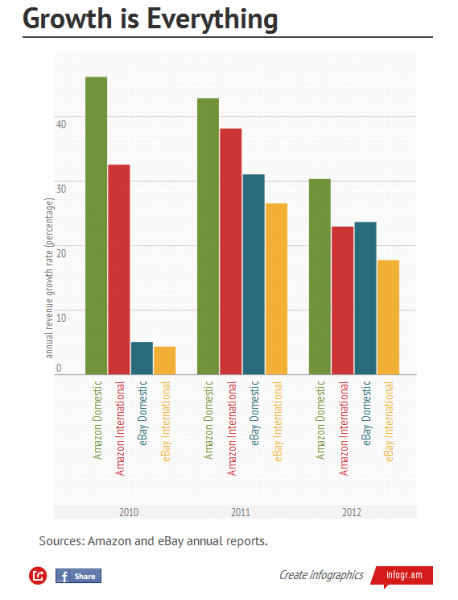 Growth is Everything | Infographics

eBay Inc (NASDAQ:EBAY) is moving in the right direction, but it’s too soon to claim that the company is about to beat Amazon at its own game. Although eBay has pushed hard into mobile commerce, and now sees almost a third of its purchases come from mobile devices, that segment will still only account for about 15% of total e-commerce revenue this year. Of course, that’s expected to rise in the future as more consumers shift their primary browsing and shopping habits from desktop to tablet or smartphone, but it would be rash to count Amazon.com, Inc. (NASDAQ:AMZN) out of this race.

The one thing eBay Inc (NASDAQ:EBAY) undoubtedly has going for it over Amazon.com, Inc. (NASDAQ:AMZN) is valuation. Compared to Amazon’s negative P/E (and 76 forward P/E), eBay looks downright cheap. Free cash flow valuation metrics bring Amazon down to a more reasonable level, but that’s still not enough to outdo eBay and its cash-spinning PayPal: