OmniVision Technologies, Inc. (NASDAQ:OVTI) is an unpredictable and inconsistent company. The maker of image sensors that are used in various consumer electronic devices has performed erratically over the past couple of years. Although revenue growth has been fantastic of late, OmniVision’s outlook over the past four quarters has been either great or downright bad.

As such, even though OmniVision Technologies, Inc. (NASDAQ:OVTI)’s revenue grew almost 45% in the recently reported first quarter and adjusted income more than doubled, a poor outlook sent the stock plunging. Management blamed a slowdown in the smartphone market in the previous quarter, along with stiffer competition for its woes, and this spooked investors.

Moreover, guidance of $375 million to $410 million as against the consensus estimate of $406.6 million further suggests that there might be deeper problems for OmniVision Technologies, Inc. (NASDAQ:OVTI), especially considering this is the quarter when Apple Inc. (NASDAQ:AAPL) will be refreshing the iPhone.

Having supplied the camera sensors for the iPad mini, the fourth-gen iPad, the iPod, and the secondary camera sensor for the iPhone 5, investors and analysts were expecting blockbuster guidance. Moreover, with a rumored low-cost “iPhone 5C” looking increasingly likely by the day, OmniVision Technologies, Inc. (NASDAQ:OVTI)’s poor guidance is puzzling.

It doesn’t add up

OmniVision Technologies, Inc. (NASDAQ:OVTI)’s two main customers are LG Innotek and Foxconn, which together accounted for 28% of its revenue in the previous fiscal year. Now, LG Innotek is an Apple Inc. (NASDAQ:AAPL) supplier as well, while Foxconn needs no introduction. So, with a ramp up in production of the upcoming iPhones, these two accounts should have been booming.

Moreover, according to the latest specifications leaked, the iPhone 5C is expected to have a 1.2 megapixel front camera and an 8 megapixel primary camera. So, the possibility of the device not having at least a secondary camera might be ruled out.

Apple Inc. (NASDAQ:AAPL) is looking to target emerging markets such as China and India with its purported budget iPhone. Morgan Stanley analyst Katy Huberty projects that a low-cost iPhone can boost Apple Inc. (NASDAQ:AAPL)’s share in China by as much as 13%. It has been reported that Cupertino has been in talks with Chinese telecom major China Mobile Ltd. (ADR) (NYSE:CHL) to put the iPhone on its network.

With more than 700 million subscribers, China Mobile Ltd. (ADR) (NYSE:CHL) will most probably help Apple Inc. (NASDAQ:AAPL) strengthen its presence in the Middle Kingdom. In addition, China Mobile Ltd. (ADR) (NYSE:CHL) is also getting ready to deploy its 4G network this year and recently awarded contracts worth nearly $3 billion for building the network.

After considering these developments, Apple would probably sell more units of the upcoming iPhones, and that’s why a shallow guidance from OmniVision suggests that the company is losing market share.

Blast from the past

A few years back when the iPhone 4S was about to be launched, there were rumors that OmniVision would be losing a portion of its Apple account to Sony Corporation (ADR) (NYSE:SNE), and that indeed happened. It looks like there might be a repeat this time, as according to Bloomberg, Sony commands a third of the $7.6 billion image sensor market and its revenue from these sensors jumped 30% last year.

On the previous conference call as well, Sony Corporation (ADR) (NYSE:SNE)’s management stated that it witnessed a considerable improvement in sales of its sensors for mobile. Adding up all these developments doesn’t paint a rosy picture for OmniVision and there seems to be a chance of the company further losing its share at Apple.

OmniVision’s revenue had dropped in 2011 after it lost some of its share to Sony in the iPhone 4S as seen in the chart below, and history might repeat once again. 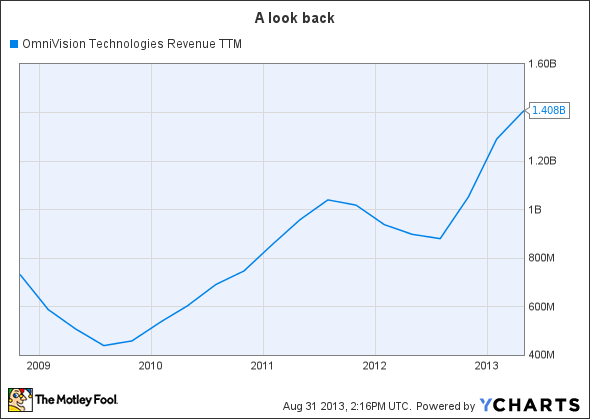 However, it still remains to be seen whether OmniVision keeps its place in the iPads and the iPod intact. But if the expected September-October release date for the iPads turns out to be true, then again there’s a possibility that OmniVision might be losing share in the tablets since production should already be ramping up.

There seems to be a lot of uncertainty regarding OmniVision right now. With a trailing P/E of 19, the stock is expensive, especially considering that revenue growth is expected to slow down. Analysts are expecting revenue to grow 11% this year and 5% next year, and given the doubtful nature of OmniVision’s Apple account, it is best to stay away from it.

The article It’s Deja Vu Time for This Apple Supplier originally appeared on Fool.com and is written by Harsh Chauhan.

Billionaire Ken Griffin Thinks Apple Inc. (AAPL) Is Cheap. What About His Other...