NV Energy, Inc. (NVE): Did Buffett Overpay for This Utility?

The S&P 500 and the narrower, price-weighted Dow Jones Industrial Average both fell 0.7% today. Consistent with those losses, the VIX Index, Wall Street’s fear gauge, rose 2.4%, to close at 14.83. (The VIX is calculated from S&P 500 option prices and reflects investor expectations for stock market volatility over the coming 30 days.)

Earlier this month, Berkshire Hathaway Inc. (NYSE:BRK.B) CEO and billionaire investor Warren Buffett told CNBC in a televised interview that “stocks are reasonably priced.” Since then, the S&P 500 has gained roughly another 2%, but it appears that Buffett is still finding value in this market.

MidAmerican Energy Holdings, a Berkshire subsidiary, announced today that it is acquiring Nevada power company NV Energy, Inc. (NYSE:NVE) for $23.75 per share, valuing the company at $10 billion (enterprise value.) The price represents a 23% premium to the stock’s closing price on Wednesday, and 18 times the next 12 months’ earnings estimate. Referring to the acquisition, Buffett said:

This is a great fit for Berkshire Hathaway, and we are pleased to make a long-term investment in Nevada’s economy. Through MidAmerican, we have found in NV Energy a great company with similar values, outstanding assets, and a superb management team.

That may well be true, but, with the greatest respect to Buffett (and I do genuinely have enormous respect for him), that combination of “outstanding assets and a superb management team” has been unable to deliver returns for shareholders. The following graph shows that, starting in 1995, the S&P 500 has soundly beaten NV Energy, Inc. (NYSE:NVE) shares on an total-return basis: 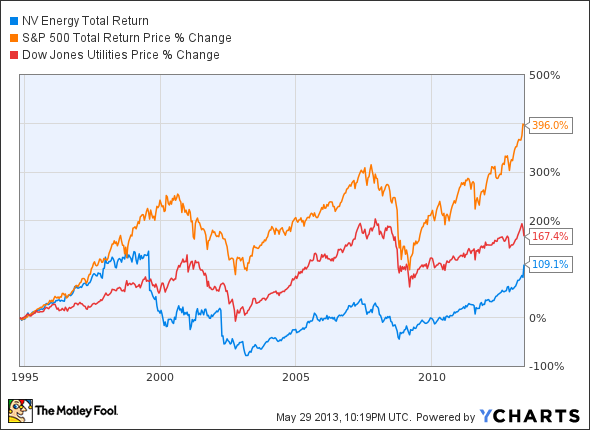 NV Energy, Inc. (NYSE:NVE) fits the new model for Berkshire Hathaway Inc. (NYSE:BRK.B) acquisitions, typified by the 2009 purchase of railroad Burlington Northern Santa Fe, under which Buffett is willing to buy more capital-intensive businesses that promise somewhat lower (but virtually guaranteed) returns. Still, NV Energy’s long-term returns have been frankly disappointing. Buffett must believe that the “additional operational and financial resources” the company will access “by joining forces with MidAmerican” (in the words of NV Energy’s CEO) will make all the difference in future.

The article Did Buffett Overpay for This Utility? originally appeared on Fool.com and is written by Alex Dumortier, CFA.

Fool contributor Alex Dumortier, CFA has no position in any stocks mentioned. You can follow him on LinkedIn. The Motley Fool recommends and owns shares of Berkshire Hathaway.