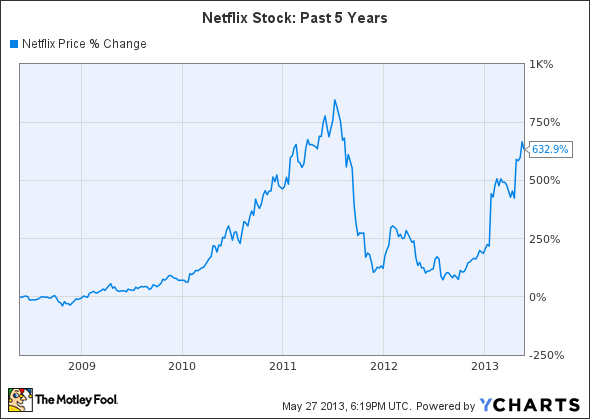 But are the massive gains over? Is it time to cash out? Not necessarily. In fact, Netflix may just be getting warmed up.

900 million
As outlined several times by Fool contributor and Netflix, Inc. (NASDAQ:NFLX) bull Tim Beyers, traditional valuation metrics are of very little use for Netflix; instead, investors should focus on the company’s addressable market. Recognizing disruptive opportunities, it turns out, requires a disruptive approach to analysis.

So how can we identify a ballpark figure of Netflix’s addressable market? Well, according to a December 2012 ABI Research report, worldwide pay-TV subscribers will exceed 900 million in 2013. Today, Netflix stands at about 36 million subscribers, adding just 3 million subscribers in the last quarter alone.

Sure, it’s unrealistic to think of this 900 million market as Netflix, Inc. (NASDAQ:NFLX)’s addressable market. But it does indeed make Netflix’s viewer base seem comparatively small, with tons of opportunity on the horizon. Even using conservatism in comparison, Time Warner Inc (NYSE:TWX)‘s HBO alone has 114 million subscribers, more than three times that of Netflix.

Netflix, Inc. (NASDAQ:NFLX)’s first-quarter streaming members have increased 37%, year over year, from 26.5 million to 36.3 million. Furthermore, this quarter’s more than 4 billion hours of streaming programming is more than double that of fourth-quarter 2011.

A different way of thinking
“Over the coming decades and across the world, Internet TV will replace linear TV,” states Netflix, Inc. (NASDAQ:NFLX)’s recently posted 11-page manifesto. “Apps will replace channels, remote controls will disappear, and screens will proliferate.”

A dubiously bullish statement, it still has some important implications. Because even if this scenario unfolds to a far lesser degree, Netflix would still substantially benefit. Whatever the end result may be, Netflix undoubtedly faces a very large market and growth trends seem ferociously in its favor.

Don’t get caught up on valuation metrics with disruptors like Netflix, Inc. (NASDAQ:NFLX). On the basis of valuation, Netflix stock is a sell. But if you take a close look at the company’s potential market and its massive growth trends, the stock is a buy.

What do you think? Is Netflix stock just getting warmed up? Or is it time to cash in?

The article Netflix Stock Can Still Make You Rich originally appeared on Fool.com and is written by Daniel Sparks.