It’s not easy being a biotech company. Every year, the biotech industry pours billions of dollars in research and development costs towards creating cutting edge drugs that treat major diseases. If these drugs are approved, then they are patented, sometimes becoming best-selling medications that generate even more revenue to aid further research.

However, when these big pharmaceutical companies create tests and drugs that can treat major, life-threatening diseases such as cancer and HIV, should these patents be relaxed or disputed, for humanitarian interests, or should they be staunchly defended as intellectual property? Let’s take a look at several recent cases in the big pharma industry to better understand the underlying debates.

A myriad of issues

When Angelina Jolie announced that she had a double mastectomy last month, shares of diagnostic test maker Myriad Genetics, Inc. (NASDAQ:MYGN) rallied. Myriad Genetics produces the only available test for hereditary breast and ovarian cancer, the BRACAnalysis test. BRACAnalysis checks BRCA 1 and BRCA 2 genes commonly associated with both kinds of cancer, and is protected by patents until 2015. The test, which was released in 1996, has been used by over a million women and is Myriad’s primary source of revenue. 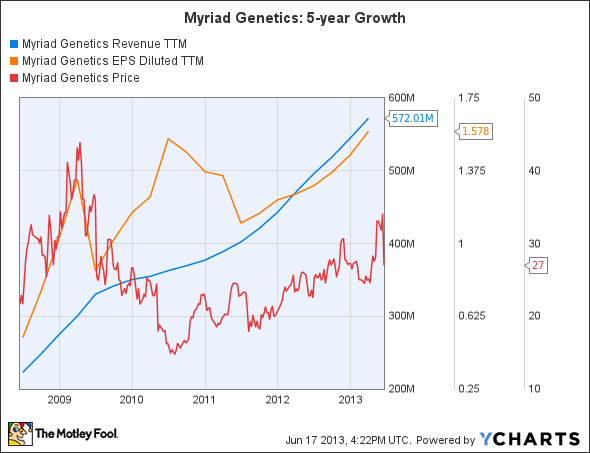 Myriad’s continued dominance of the field is considered a virtual monopoly over future research, so a group of cancer researchers has battled it out with Myriad over the past four years to dispute its patents on human genes.

This case recently concluded, with the Supreme Court handing Myriad a partial victory, which stipulated that genes found naturally in the body can not be patented, but synthetically created DNA, known as cDNA, can be patented. Although this only affects five of Myriad’s 24 patents, which include naturally occurring genes, scientists believe that this ruling gives researchers more freedom to pursue similar breast and ovarian cancer research, as long as they use non-synthetic gene sequencing techniques.

This means that researchers can use non-synthetic genes sequences to improve customized gene-based treatments for cancer and other diseases without being sued by companies such as Myriad.

Although researchers are unlikely to successfully duplicate Myriad’s BRACAnalysis tests anytime soon without stepping into patented territory, the ruling spooked investors. Shares of Myriad have plunged more than 20% since the ruling on June 13. The Myriad case highlights the vulnerability of biotechs that dominate a single test or treatment of a life-threatening disease.

The challenges that Myriad faces in the United States are amplified dramatically in India. Major Western pharmaceutical companies such as Pfizer Inc. (NYSE:PFE) have aggressively expanded into emerging markets such as India to find new sources of revenue growth to offset steep losses in Europe. At first glance, India looks like a strong growth market for big pharma, since it has a $30 billion drug market that is growing 13% annually, according to research firm IHS Health.

Over the past year, however, India’s government has been allowing its own generic drug companies, such as Natco Pharma, to produce lower-priced versions of patented products from Western drugmakers. India claims that without this compulsory licensing, many Indians who cannot afford access to these expensive drugs would die. A third of the Indian population lives below the poverty line, with an income per capita of $1,410.

During a congressional testimony in March, Pfizer Inc. (NYSE:PFE) claimed that India was abusing international law, not by aiding its people through cheaper drugs, but allowing its own domestic generic companies to unfairly profit from drugs discovered through costly research & development from leading Western drugmakers.

Yet despite these complaints, Pfizer Inc. (NYSE:PFE) has still grown its Indian revenue by 70% since 2005, winning 161 patents along the way. Pfizer currently ranks fourth in the total number of granted patents in India since 2005, trailing Sanofi SA (ADR) (NYSE:SNY)’s 333 patents, F. Hoffman La Roche’s 243 and Novartis AG (ADR) (NYSE:NVS)’s 200. Pfizer’s market share also grew 79% over those eight years, well ahead of the industry average of 52% growth.

By all counts, Pfizer Inc. (NYSE:PFE) is actually luckier than most of its western peers.

The Indian government ruled against Bayer AG last March, allowing Natco Pharma to produce a copy of Bayer’s patented liver and kidney cancer medicine, since it wasn’t fully available to local patients due to high costs and accessibility. In April, Novartis lost a seven-year long battle to patent its anti-cancer drug Glivec in India, due to a ruling that the new version wasn’t different enough from the older one.

Despite these setbacks, India and other emerging markets are forecast to comprise 38% of the drug industry’s global revenue by 2020, according to a forecast from Barclays. These challenges in India highlight another problem with the biotech industry – expanding into emerging markets isn’t as easy as previously thought.

India isn’t the only country attempting to cap Western drugmakers’ growth in developing and emerging markets. The South African government has recently taken moves to stem the practice of “evergreening” – where Big Pharma companies slightly modify an existing drug near patent expiration to create a new drug in an effort to extend its patent protection.

While this tactic works frequently in the United States, in South Africa higher rates of cancer and HIV/AIDS have made increasing the availability of cheaper drugs a humanitarian priority. Doctors Without Borders (MSF) is currently pushing the South African government to follow India’s example and support domestic generic drug manufacturers to increase the availability of these drugs.

Although India did not grant Novartis a patent for its cancer medication imatinib, South Africa granted the company an initial patent in 1993 that only expired last month. However, South Africa granted Novartis second patents to extend the company’s monopoly on cancer treatments to 2022. MSF forecasts that the Novartis patent increases treatment costs for cancer patients in South Africa to $34,000 per year, 259 times the cost of using a comparable Indian generic drug.

Therefore, a comparison of India and South Africa highlights the dramatic cost difference between name brand and patented treatments, and raises some serious ethical questions for Big Pharma – should companies like Pfizer Inc. (NYSE:PFE) and Novartis work with local governments to reach more patients at lower margins, or continue fighting to preserve their patents?

I’m not a big fan of investing in the biotech industry. Biotech companies are more dependent on big blockbuster drugs, clinical trial approvals, and patent extensions than solid fundamentals. In that respect, biotech stocks can be a big gamble – the classic case of a high-risk and high-reward bet. Companies such as Novartis and Pfizer Inc. (NYSE:PFE) have big enough portfolios to withstand a few patent setbacks, but companies like Myriad Genetics, Inc. (NASDAQ:MYGN) are too exposed to a single market.

Even though Big Pharma is often portrayed as a richly capitalized, invulnerable industry, it is highly vulnerable to compulsory licensing in emerging markets. Therefore, this is a Catch-22 – if the countries across the world want Big Pharma to continue developing cutting edge tests and treatments for life-threatening diseases, then they have to generate enough revenue to fund their massive R&D operations. I believe that this contradiction and struggle will continue for the foreseeable future, and could throttle Big Pharma’s plans for rapid global expansion.