Monsanto Company (MON): Why This Stock Won’t Pause Even if Markets Slip

Not too long ago, I tagged this stock as one of the best picks for 2013 riding on stupendous numbers, solid guidance, and macro tailwinds. Two days back, it hit a 52-week high, taking its year-to-date returns up to nearly 8%.

What is Monsanto Company (NYSE:MON)’s USP? Has it really fared well enough to deserve these premium valuations? More importantly, is it time to book some profits, hold on, or even dive into the stock right now?

If a stock touches a 52-week high, it is only prudent to see how the company has performed over the past year, particularly in terms of top and bottom line growth. Monsanto has pulled it off quite well. 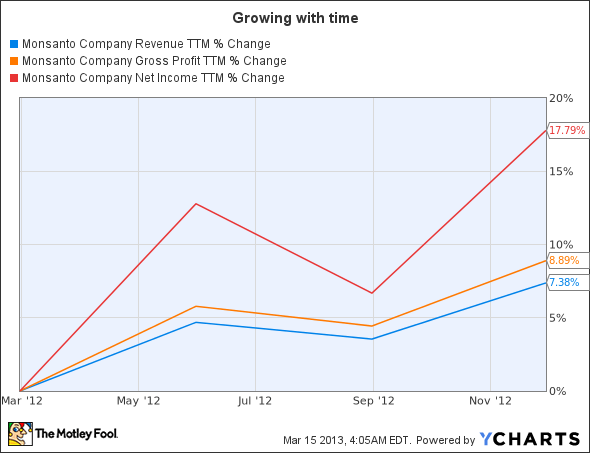 These figures look brilliant. I particularly like the fact that Monsanto Company (NYSE:MON)’s net income has grown at a pace more than twice that of revenue. I give a green thumbs up to a company that can convert its incremental revenue into income with such proficiency, because that only reflects management’s cost-control capabilities even as the company grows.

So does it also mean that Monsanto outsmarted its peers in the game? Here’s how it stacks up against the two closest rivals in the seed business.

Monsanto Company (NYSE:MON) is the prettiest picture out there, beating DuPont and Syngenta across all measures. The best part is that Monsanto also sports the lowest total debt-to-equity ratio among the three, which somehow also explains its lower ROE. Higher leverage almost always pushes up ROE. Monsanto tops off with an enviable free cash flow of nearly $2.9 billion. That makes it one of the few companies that churn out greater cash than it earns as profits.

Monsanto is one of the best plays in the agriculture sector for two reasons – one, it deals in a product that is better insulated compared to other agriculture items, and two, it enjoys a leadership position in its field.

Seeds are indispensable needs for farmers, irrespective of the weather conditions. One might want to put fertilizers in the same league, but the problem with the fertilizer industry is that it is highly prone to fluctuations in prices, unlike seeds. Take the case of Potash (NYSE:POT)Corp, which dominates the potash nutrient market in the U.S. Like Monsanto Company (NYSE:MON), it faced the ups and downs of a solid spring followed by the most severe drought ever last year. But while Monsanto crossed over comfortably, PotashCorp ended 2012 with 9% drop in revenue and a dismal 32% slump in profits. Blame lower nutrient prices and soft global demand for potash. Comparatively, CF Industries, the nitrogen king, had a much stronger 2012. Nitrogen enjoys better demand as well as prices compared to as one of the most essential nutrients. Simply put, the volatility in fertilizer business is evident.

Now if I consider a product line like agricultural equipment, it certainly stands in better stead than nutrients. Deere (NYSE:DE), the world’s top tractor maker, saw its financial year 2012 net sales grow 13%, with a 9.5% improvement in net profit. Agriculture equipment sales rose 16%. That’s good, but again, how much farm equipment sale grow depends largely on how cash rich farmers are. Tractors are not something a farmer needs to replace every year, unlike seeds. And those with an aging fleet might also postpone fresh purchases if a year turns out less profitable, perhaps because of low crop prices or yields. Is that why Deere expects a modest 4% rise in farm equipment sales this year?

Ready for the grab

The simple point I am trying to drive home is that demand, as well as prices for seeds, fluctuates the least. For Monsanto, the case could get stronger this year as it specializes in genetically modified seeds that have the ability to withstand severe weather conditions, as well as pests, to a great extent. After the ravaging drought, farmers are likely to be increasingly inclined towards these engineered seeds. DuPont and Syngenta should gain as well, but Monsanto’s competitive advantage lies in the fact that even DuPont licenses its gene traits for some products. DuPont even lost a $1 billion suit against Monsanto last year, though the former continues to fight it out at courts.

Monsanto Company (NYSE:MON) set a record last year with 18 projects moving up the development ladder. It has started distributing its new highly-resistant DEKALB DroughtGard corn hybrids across the Western Great Plains to make sure farmers can plant them in the upcoming spring. Latin America should be another huge opportunity this year as Monsanto launches its double- stack corn in Brazil and triple-stack corn in Argentina. Meanwhile, Syngenta is expanding its corn seed facility in Brazil, while DuPont is readying corn varieties for the same market. The two are also trying their hands at wheat hybrids, something that might be next on Monsanto’s agenda. But even without the so-called wheat hybrids, Monsanto continues to lead the race.

Leadership and a best-in-industry profit margin places Monsanto a notch above peers. Hopes for another good spring season in the U.S. and record-breaker plantings in Latin America this year certainly don’t hurt the company’s prospects. Monsanto reported a heavy pre-spring order book in January, even prompting it to up its full-year earnings guidance. Even if it hits the lower end at $4.30 per share, that would be a good 16% upside on 2012 earnings.

Only, at 25 times earnings, Monsanto Company (NYSE:MON) is one of the most expensive stocks across the agriculture sector. But when analysts expect the company to grow at 24% clip this year, there’s not much to complain about.

The article Why This Stock Won’t Pause Even if Markets Slip originally appeared on Fool.com and is written by Neha Chamaria.