Microsoft Corporation (MSFT): Worth a Ticket – but Don’t Expect an Easy Ride

Long gone are the days when Microsoft Corporation (NASDAQ:MSFT) had a monopolistic dominance of the operating system market. Today, even the idea of being able to easily sync your desktop computers/notebooks to tablets with a single operating system isn’t helping Windows 8 sales. Furthermore, when looking at the Surface tablet sales, the numbers are nothing but a letdown.

The Surface tablet reportedly sold a disappointing 1 million units in the fourth-quarter of 2012, half of what the analysts had originally expected. Meanwhile Apple Inc. (NASDAQ:AAPL) shipped more than 22 million tablets in the same period. The explosive sales growth in the last few years at Apple led to its insane stock growth. But during the same time, Microsoft was stamped inefficient at product development and innovation, resulting in a stagnant price action in the company’s stock price.

Consequently, the one-time darling of the Wall Street now finds itself in unfamiliar territory — having to prove itself again. But are there any reasons to support Microsoft Corporation (NASDAQ:MSFT) anymore?

In recent years, investors saw the impressive rise of Apple and have since desired the same growth from every large-cap company. Apple captured a once in a lifetime opportunity with the iPhone, which led to an era of explosive earnings growth. The iPhone helped Apple in producing record sales and profits even with a small amount of market share. But emulating Apple’s earnings growth of over 250% and revenue growth of over 150% becomes even harder for Microsoft, as it’s already a mega-cap stock.

Microsoft has always had the spotlight shining on all of its products. Some investors have even cheered Microsoft’s new Windows 8 software and the Windows Surface tablet, while others have vocally criticized the company’s efforts. Microsoft Corporation (NASDAQ:MSFT) bulls have a lot of arguments to make. They remain confident that with its diversified Windows, Business, and Entertainment segments, Microsoft will remain a tech giant for years to come.

Long-term investors also argue that Microsoft Corporation (NASDAQ:MSFT) spends a fortune on research and development, and therefore builds products that are hard to compete with. For instance, in the Windows division, Microsoft’s PC market dominance remains safe as businesses are unlikely to adapt to other operating systems any time soon. Also, in the consumer market Apple’s Mac generally serves the high end of the market where Microsoft’s market share loss has already more or less occurred. Microsoft Office, Server Products, Xbox 360, Skype, Azure (cloud computing platform), Hotmail, and Windows 8 all give long-term investors hope that Microsoft will continue on its path of a sustainable revenue growth.

No doubt Microsoft has done a decent job boosting revenues over the last four years. Its revenue has increased from around $58 billion in 2009 to an expected $80 billion in 2013. This will give the company a compound revenue growth rate of over 8 percent. Admittedly, the numbers aren’t mind blowing, but we’re talking about a mature mega-cap company here. But like Apple, Microsoft will have to continue to innovate in order to remain competitive. This will mean continued high spending in areas like research and development, as well as sales and marketing.

Moreover, Microsoft trades at 10.2 times trailing earnings; analyst expectations are for $2.85 in EPS for the current fiscal year, and the current stock price is only 9.7 times that figure, compared to the Software & Programming industry, which has a P/E ratio of 20.7.  This suggests Microsoft is undervalued when compared to its industry and competitors.

Even Microsoft’s peers in the entire technology sector trade at a P/E ratio of 20.2, again suggesting Microsoft is undervalued compared to its sector peers. Microsoft also has an impressive cash flow generation, with a cash flow margin of 45% and free cash flow of over $30 billion. Also, when I look at the enterprise value implied by the current stock price, it is only 6.3x trailing EBITDA; not as obviously low a multiple, but still well within value territory for such a large and growing company.

Moreover, Microsoft pays a dividend that has grown rapidly since it was first started. The rapid dividend increase over the last few years has given shareholders something to cheer about amidst the lackluster stock performance. 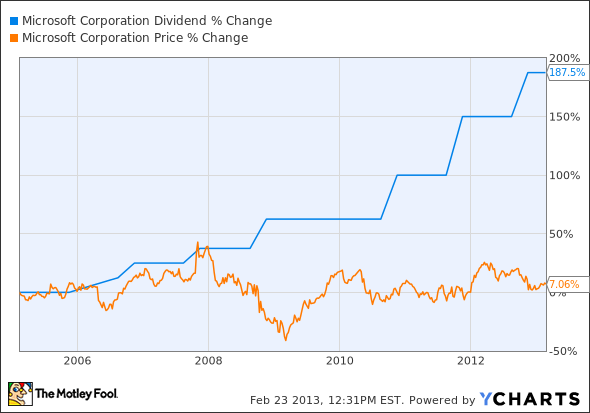 But Microsoft’s search engine market share hasn’t improved. Bing currently stands at less than 5% of the global market share, whereas Google Inc (NASDAQ:GOOG)’s more than 80% market share still makes the latter a leader by a wide margin. Microsoft wants to dominate in search, but so far has remained unsuccessful. For this, Microsoft partnered with Yahoo! Inc. (NASDAQ:YHOO) to replace its search and ads engines under a 10-year deal in order to improve its Bing search platform.

Google’s free Chrome operating system being incorporated in inexpensive laptops is an emerging threat. This could put serious pressure on Microsoft’s operating system revenues. Moreover, Google docs is another threat for Microsoft’s Office. Considering that these segments are Microsoft’s real operating income strengths, any market share losses to similar Google’s products would put a dent in the former’s fundamentals.

Despite all the challenges, it is my view that the risk to Microsoft’s fundamentals are overwhelmingly skewed to the upside, which presents a very clear and intriguing investment opportunity on the long side. I’m comfortable with a long-term revenue growth outlook of 8% on Microsoft, along with a steady improvement in cash flow generation.

All told, I think Microsoft can grow its cash flow at a 7%-9% rate for the long term — discounting that back, it suggests a fair value of about $41, making it one of, if not the, cheapest mega-cap stocks in the market today. Even with a two-point premium in the discount rate to other established tech companies like Cisco Systems, Inc. (NASDAQ:CSCO) and Oracle Corporation (NASDAQ:ORCL), Microsoft looks meaningfully undervalued today.

Unfortunately, investors are so troubled by the fears of competitors eating into Microsoft’s market share that it is hard to see how sentiment will let this stock work in the near term. I think patient investors who believe rational heads will prevail could well be rewarded in the years to come, but don’t expect an easy ride.

The article Worth a Ticket – but Don’t Expect an Easy Ride originally appeared on Fool.com and is written by By Nauman Aly.