Investors love stocks that consistently beat the Street without getting ahead of their fundamentals and risking a meltdown. The best stocks offer sustainable market-beating gains, with robust and improving financial metrics that support strong price growth. Does GameStop Corp. (NYSE:GME) fit the bill? Let’s look at what its recent results tell us about its potential for future gains.

The graphs you’re about to see tell GameStop Corp. (NYSE:GME)’s story, and we’ll be grading the quality of that story in several ways: 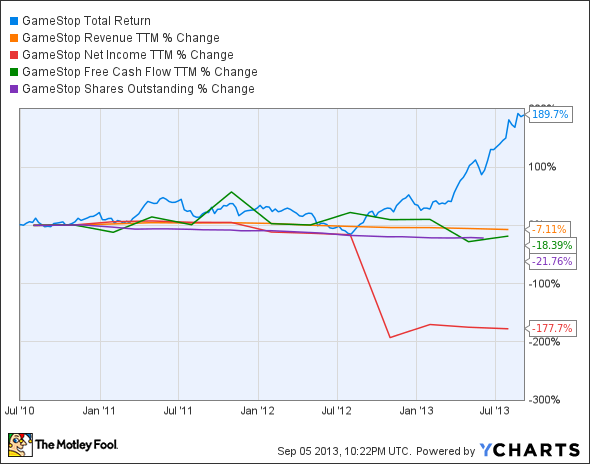 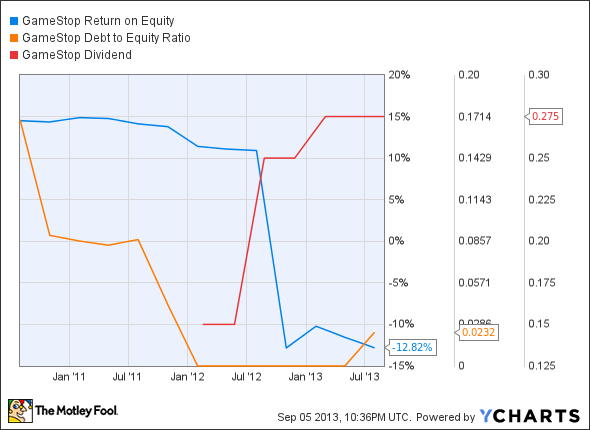 GameStop Corp. (NYSE:GME) doesn’t come through with flying colors, as it earned four out of nine possible passing grades, and two of those passing grades were granted on the track record of a recently initiated dividend. Over the past two years, GameStop’s free cash flow has weakened, but hardly to the degree as its net income, which had been falling away from free cash flow even before its crash in 2012. Despite this weakness, GameStop’s shareholders have enjoyed significant gains, nearly all of which have come in the past 12 months. How might GameStop sustain this rebound? Let’s dig a little deeper to find out.

My fellow Fool Sean Williams notes that GameStop Corp. (NYSE:GME) has been looking to leverage the hotly anticipated next-gen consoles from Microsoft Corporation (NASDAQ:MSFT) and Sony Corporation (ADR) (NYSE:SNE), which are expected to launch in November. However, GameStop might have to confront several difficulties in the used games market, which has been roiled by proposals to restrict game licenses to the original purchaser. The two console makers have since backed off of this strategy, but over the long run, a shift to digital gaming will destroy GameStop’s bricks-and mortar used-game retailers, since there’s really no need to go to a store when everything is contained in the cloud. It’s worth mentioning that GameStop made more than 21% of its total revenue from used games last year. GameStop’s reliance on used games pose a potential threat on its growth prospects, regardless of console resale policies.

However, GameStop’s new-game segment has a few rays of sunshine to look forward to. My Foolish colleague Rick Munarriz notes that the launch of a few major new games could boost GameStop’s sales growth in the next few quarters. Activision Blizzard, Inc. (NASDAQ:ATVI)‘s newest shooter, Call of Duty: Ghosts, will hit stores alongside the new consoles, and if the series continues its trend of record-breaking sales, it could produce notable results on GameStop’s fourth-quarter earnings. Take-Two Interactive Software, Inc. (NASDAQ:TTWO)‘s long-awaited Grand Theft Auto V will also hit the shelves any day now, and that’s another record-breaking series to pad GameStop’s bottom line.