The committee in charge of the Dow Jones Industrials doesn’t make changes very often, but when it does, those changes usually reflect the changing fortunes of the companies involved. Unfortunately for investors who follow the Dow’s moves, the Dow Index Committee’s timing isn’t always the best, with some cases in which stocks were added to the Dow at just about the worst possible time.

Is that bad timing happening again this time around? Let’s take a look at whether investors should be looking at any potential warning signs.

One of the biggest mistakes that many investors make it to chase performance. Yet at least when you look back over the past year, it looks like the Dow might be doing some performance-chasing of its own.

Nike and Visa Inc (NYSE:V) have both more than tripled the Dow’s gains over the past year, while Goldman Sachs Group, Inc. (NYSE:GS) comes in with a near-triple of its own. 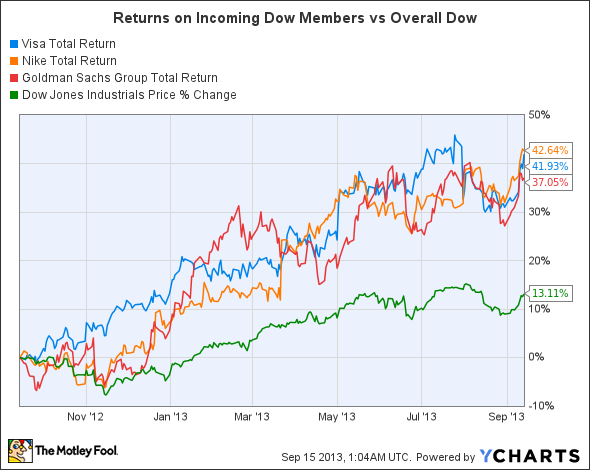 Of course, investors want to see stocks in the Dow that have managed to show a track record of success. Visa Inc (NYSE:V)’s card network dominates the industry, and the company is working hard to sustain its competitive advantage by moving into mobile-payment processing. Goldman Sachs Group, Inc. (NYSE:GS) has recovered from the financial crisis and continues to have a reputation for finding ways to profit even as regulators have clamped down on the financial industry. Nike has thus far held off competitors to sustain its empire atop the athletic-footwear business.

The problem, though, is that the performance of the Dow’s three incoming stocks looks awfully familiar to those who follow Dow history. Take a look at these figures from 1999: 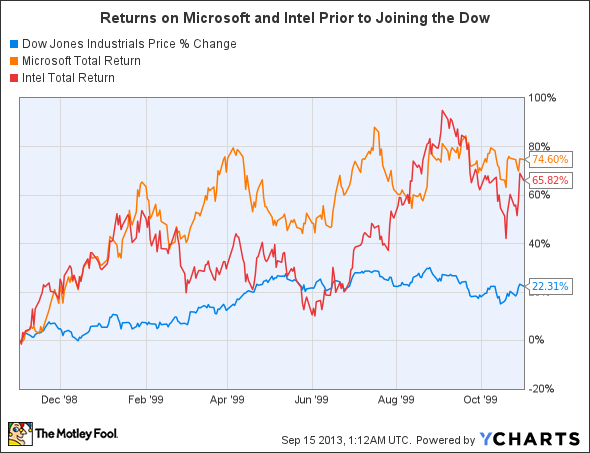 Both Microsoft Corporation (NASDAQ:MSFT) and Intel Corporation (NASDAQ:INTC) had also tripled the Dow’s returns over the year before they joined the average, putting the finishing touches on a huge bull-market run that catapulted the tech giants into the uppermost echelons of the stock market.

Yet the future looked a lot uglier for those stocks: 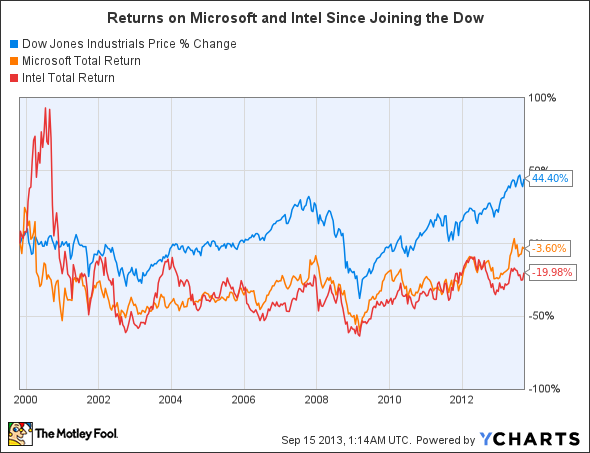 The tech bust punished both stocks soon after they joined the Dow, and even 14 years later, they still haven’t managed to return to break-even.

Before you panic over Nike, Goldman, and Visa Inc (NYSE:V), you should realize that many new Dow stocks have produced strong performance after joining the average. New entrants aren’t doomed to bad performance.

But you also shouldn’t assume that joining the Dow will be an automatic moneymaker for investors. Future success all depends on what happens to the fundamentals of each company’s business in the years to come.

The article Is a Scary Deja-Vu Moment Coming for the Dow? originally appeared on Fool.com and is written by Dan Caplinger.

Fool contributor Dan Caplinger has no position in any stocks mentioned. The Motley Fool recommends Goldman Sachs, Intel, Nike, and Visa and owns shares of Intel, Microsoft, Nike, and Visa.