When it comes to the wonderful world of computer software, there are not many companies that have as much experience and knowledge as Microsoft Corporation (NASDAQ:MSFT). Does this mean the company is immune to the ups and downs of the industry? Of course not.

According to a recent report by IDC, software revenues are on the rise in emerging markets. For companies such as Microsoft, this is big news as it will tell them where to spend additional time and resources in the future.

Here is a brief excerpt from the report, giving a better idea of where things stand moving forward:

“The worldwide software market grew 3.6% year over year in 2012, less than half the growth rate experienced in 2010 and 2011, according to the International Data Corporation (IDC) Worldwide Semiannual Software Tracker. Although some deceleration was expected, the economic contraction in the mature markets of Western Europe and Japan played a determinant role in the overall market performance. Meanwhile, the emerging markets of Central and Eastern Europe, Middle East, and Africa (CEMA), Latin America, and Asia/Pacific (excluding Japan, Australia, and New Zealand) enjoyed year-over-year growth of 7.2% in 2012. This was the fourth consecutive year of solid growth in these emerging markets, enabling them to collectively gain more than two points of worldwide market share over this period.”

As you can see, there are multiple emerging markets that accounted for this growth including those in Central and Eastern Europe, Middle East, and Africa.

With all this in mind, you may be wondering where Microsoft Corporation (NASDAQ:MSFT), as well as its competitors, fit into the puzzle.

As noted by IDC, the top dogs in the industry are now relying more heavily on emerging markets. This is due in large part of the fact that “emerging markets now represent a higher share of global revenues for them than the market average of 14.4%.”

Microsoft Corporation (NASDAQ:MSFT), in particular, experienced a 3.9 percent emerging markets growth in 2012. Although this number may sound big, other companies, such as SAP, experienced growth of up to 14 percent.

Much like the smartphone industry, software providers are aware that emerging markets could be the wave of the future.

Microsoft Corporation (NASDAQ:MSFT) is moving in the right direction, and is sure to focus its attention on these regions moving forward.

For a better idea of how some of the top companies in the industry are performing, check out the chart below: 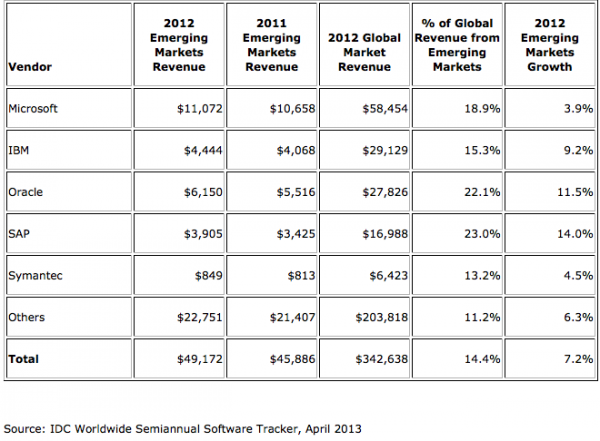