McDonald’s Corporation (MCD): A Metric in Its Favor

From the get-go, I’ll just go ahead and state that I’m a big fan of Chipotle Mexican Grill, Inc. (NYSE:CMG).  This company is high growth, no debt, and has creative management.  They have quite a lot to make one believe that this company will be a winner for a long time.

But it’s not all positive when assessing Chipotle.  While reading through the risks section of their annual report, one risk in particular caught my eye:

We may not persuade customers of the benefits of paying our prices for
higher-quality food.

You see, Chipotle is many things, but cheap fast food is not one of them.  Management knows that they aren’t cheap, and has no plans to become cheap.  The philosophy of the company is that people will be willing to shell out for “Food With Integrity.”  Food with integrity means organic crops, no growth hormones in the chicken, and local farmers to name a couple things.  Doing business that way isn’t cheap, and doesn’t allow Chipotle much flexibility in their pricing.  They have even toyed the idea around of raising prices sometime in the near future. 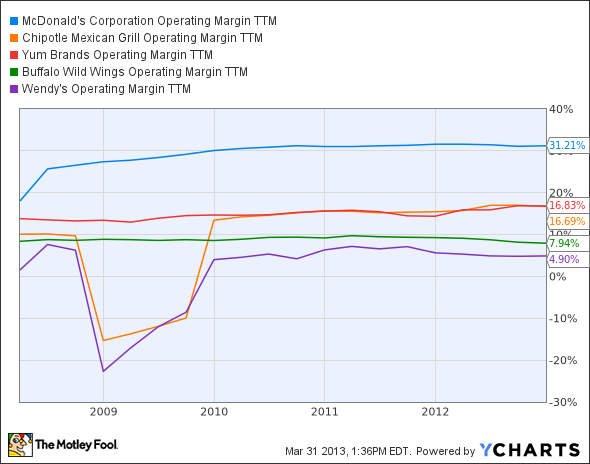 But actually when you look at the numbers, Chipotle does a pretty darn good job with their operating margin.  Their performance is almost identical to that of Yum! Brands, Inc. (NYSE:YUM) and blows The Wendy’s Company (NASDAQ:WEN) out of the water.

That’s also when you see that McDonald’s Corporation (NYSE:MCD) is actually the king of margins.  This puts McDonald’s at a huge advantage to their competitors.  As food prices rise, as energy needs increase, salaries swell, and customers demand value – McDonald’s has a bigger buffer to absorb these costs without raising prices.

Customers can only tolerate price increases so much, especially when it comes to fast food.  One could argue that a cheap menu is the main reason people choose McDonald’s Corporation (NYSE:MCD).  Competitors have had a hard time competing against the Dollar Menu.  If margins are any indicator, I think the Dollar Menu is safe for some time yet.  Not so with Wendy’s.  Wendy’s, with their small margin, has been forced to raise their value menu prices from $0.99 to $1.99 with several items.

2012 was a rough year for food prices thanks to the mega-drought.  Last year Chipotle Mexican Grill, Yum, Wendy’s, and Buffalo Wild Wings (NASDAQ:BWLD) (among others) all had to raise their menu prices.

Buffalo Wild Wings is trying to get creative with their price increases.  With the record chicken wing prices last year, they already had to raise prices, with very little push-back from customers.  But this year they are going to try selling their wings in portions based on weight rather than number of wings.  Why would they experiment with this?  You’ve got to keep customers happy, something that can be hard to do when you increase prices.

To be fair, McDonald’s Corporation (NYSE:MCD) raised prices too.  I don’t think that we should assume that they never will increase prices.  But being in their position, price increases can be more of a management choice rather than a do-or-die necessity.

Can Chipotle Mexican Grill continue to persuade people to pay a premium for burritos with integrity?  I don’t think it is a sure thing by any stretch of the imagination.  A few months back now, David Einhorn decided to short Chipotle due to competition from Taco Bell’s Cantina Bell.  Many argue that Einhorn was right and that Cantina Bell did steal customers away from Chipotle.  In any case it does highlight Chipotle’s vulnerability.

But McDonald’s Corporation (NYSE:MCD) is another story.  With one of the highest operating margins around, management has a pretty effective tool at their disposal. They have a lot more flexibility when it comes to pricing.  Some call this pricing power.

For this reason, among others, McDonald’s appears to be positioned to continue to be a dominant force in fast food for years to come.

The article A Metric in McDonald’s Favor originally appeared on Fool.com.