Food producers are perhaps one of the best investments anyone can make. But in my opinion, fertilizer is the second best choice, since you need it to grow that food in the first place.

Fertilizer companies are split into two main camps, the nitrogen names such as Terra Nitrogen Company, L.P. (NYSE:TNH) and Agrium Inc. (NYSE:AGU) , which are reporting record earnings thanks to continually depressed natural gas prices. Then there are the potash names, such as

Potash Corp./Saskatchewan (USA)(NYSE:POT) and Mosaic Co (NYSE:MOS), which are reporting significantly lower earnings thanks to low potash prices. (Potash companies usually have a monopoly over potash mines, since they sell their potash from these mines at lower prices they make less profit.)

Fertilizer names that rely on natural gas have been reaching record high valuations as the price of natural gas falls. The cost of natural gas can account for up to 80% of the production cost of nitrogen-based fertilizer.

Based on the current market, a nitrogen-producing stock would be your best bet. In addition, nitrogen fertilizer has to be constantly re-spread, unlike potash, which can be mixed into the soil and left for an extended period. Thus, buyers will tend to buy more nitrogen-based fertilizer.

In the chart below, we’ve listed the difference in company structures because master limited partnerships must distribute 90% of their income to partners. They also come with their own set of tax issues compared to regular stocks.

Out of these six producers, I am going to look at three closely.

Terra Nitrogen Company, L.P. (NYSE:TNH) is the highest-yielding, thanks to its master limited partnership structure. The company has produced below-average EPS growth for the past five years, and is a nitrogen focused producer.

CF Industries has achieved the best EPS growth over the past five years. The company produces fertilizer from both and nitrogen and potash, and currently has the lowest P/E ratio in the group.

Agrium Inc. (USA) (NYSE:AGU) has achieved the second-highest EPS growth over the past five years. The company is the second cheapest in the group by P/E ratio, and is another nitrogen-based producer.

The three companies I am looking at are all nitrogen-based producers. One of the reasons they have been so successful over the past five years is because of their profit margins and highly cash-generative nature. 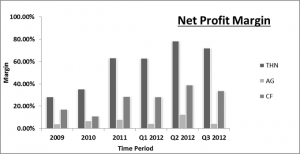 Terra Nitrogen Company, L.P. (NYSE:TNH) has achieved the best profit margins over the past few years. The gradual decline in the price of natural gas since 2009 has meant that net margins have grown every year consistently since 2009.

The table shows the profit margins that Terra Nitrogen Company, L.P. (NYSE:TNH) is managing to achieve, partly thanks to its relatively small size and partly thanks to low natural gas prices. Terra’s margins have steadily increased since 2009 as the price of natural gas fell. Indeed, these high gross margins have flowed through onto the company’s net margin making Terra by far the most efficient company of the group.

CF Industries is a potash- and nitrogen-based producer, which gives the company the best of both worlds and perhaps the most flexibility and security. In addition, Terra Nitrogen is an indirect, wholly owned subsidiary of CF Industries, so CF gains some of Terra’s strong cash flow.

As the table shows, CF produces gross margins of around 60%, up from 40% in 2009 thanks to natural gas prices. Unlike Agrium Inc. (USA) (NYSE:AGU), CF manages to translate the majority of its gross profit into net profit, making the company look highly cash generative. 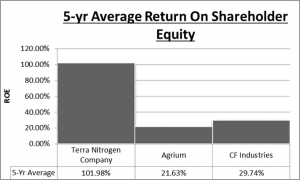 Terra Nitrogen is by far the best here. The company’s cash-producing operations have allowed the management to build its net cash balance, while still spending on capital expenditures.

However, over the past five years, both Agrium and CF have managed to produce a ROE of about 4% per year. Indeed, Mosaic and PotashCorp — the potash producers who have underperformed with other valuation metrics — produced an average ROE of 5.5% for the same period. Although these nitrogen producers have grown more quickly, they have not been able to utilize their free cash as well as the potash producers.

Terra Nitrogen once again has the winning cash flow. As I have already mentioned, the company is a limited partnership, therefore it returns the majority (90%) of its profit to shareholders through dividends or cash distributions. Terra Nitrogen is the only business in this analysis that has a net cash balance.

That said, CF industries has a solid cash flow and is returning cash to shareholders through both dividends and stock buybacks. Even so, CF still has cash to spare, and a net change in cash of $1 billion over 2012 has allowed the company to work on reducing net debt.

Agrium is at the back of the group once again. The company is using the majority of its operating cash flow on investing, and as a result, it’s having to issue debt to remain cash flow-positive. In addition, the company pays the smallest dividend (by dollar volume) in the group.

Overall, the best fertilizer company appears to be Terra Nitrogen, despite being the smallest. Terra has the best margins, has produced the best return on equity and has plenty of free cash, which is has to return to shareholders or re-invested due to its partnership structure.

However, I am hesitant about Terra’s size, and the fact that the company only has one manufacturing facility.

The article Long Term Investing in Fertilizer originally appeared on Fool.com and is written by Rupert Hargreaves