Kellogg Company (NYSE:K) is a favorite among breakfast-eaters everywhere, with its cereals and other food products being an essential part of the diets of people around the world. Yet, while Kellogg stock has soared in response to the recognition of the industry’s importance in producing dependable and consistent earnings for investors, the extent of the stock’s rise to all-time highs isn’t entirely justified by Kellogg’s fundamentals. Let’s take a closer look at Kellogg and what’s been behind its big rise lately.

Where Kellogg has found growth
The food industry is generally seen as being quiet and defensive, with opportunities for solid dividend income, but not substantial growth prospects. Kellogg has a long history of steady dividend payments to shareholders, with annual payout increases every year since 2005.

But Kellogg Company (NYSE:K), in particular, took advantage of a huge growth opportunity, by making the most of a potential competitor’s missteps. Early last year, Kellogg was able to swoop in and buy the Pringles potato chip brand from The Procter & Gamble Company (NYSE:PG) after snack company Diamond Foods, Inc. (NASDAQ:DMND) failed to follow through on its initial bid for the P&G division amid a controversy about Diamond’s accounting practices. Although margins from Pringles initially proved to be somewhat lower than the company’s average, Kellogg has seen substantial organic growth from the division, boding well for its ability to apply pricing pressure to boost margins in the future.

Moreover, Kellogg Company (NYSE:K) has sought to get in on emerging markets as a growth driver. Last September, the company entered into a joint venture with Wilmar International to distribute its products in China. With its snack-food market estimated at $12 billion, and showing rapid increases in growth, China represents a golden opportunity for Kellogg.

Kellogg and the Buffett effect
Kellogg Company (NYSE:K) stock has been rising without a substantial break for nearly a year now, but what really accelerated interest in the space was the decision from Berkshire Hathaway Inc. (NYSE:BRK.B) to partner with a private-equity firm to buy out food giant Heinz. In classic Warren Buffett fashion, the Heinz acquisition revealed the earnings potential of the food industry, which many investors had given up on as having few prospects. 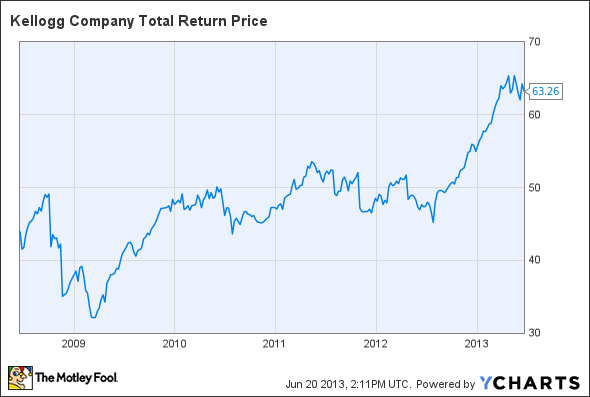 Since the Heinz buyout, though, Kellogg Company (NYSE:K) and many of its peers have seen their stocks rise even further. In particular, rival General Mills, Inc. (NYSE:GIS) got a big bump after the late-February Heinz announcement, as investors speculated about whether it or another food company might be the subject of the next big takeover in the industry. Thus far, further major consolidation hasn’t really taken place, but many of the potential growth prospects still remain as bullish factors driving investors’ considerations in deciding whether to hang onto their stock.