Although its based in Kansas City, Mo., the company is far more than just the north to south rail operator connecting Kansas City, Mo. and Port Arthur, Texas that was founded in 1887. Kansas City Southern (NYSE:KSU) now operates some 6,600 miles of railroad and has investments in the U.S., Mexico, and Panama.

Its network helps connect Mexico, the Southeast and Southwest U.S. This includes its number of connections between Kansas City, Mo. and the Gulf of Mexico.

Revenue is expected to be up 8.1% in 2013, thanks to volume growth and stabilizing pricing. Kansas Southern expects mid-single-digit growth in both pricing and volume this year.

One of Kansas’ biggest initiatives of late has been reducing debt. The company has reduced its debt-to-equity ratio from above 1 at the end of 2008 to approximately 0.6 last quarter. 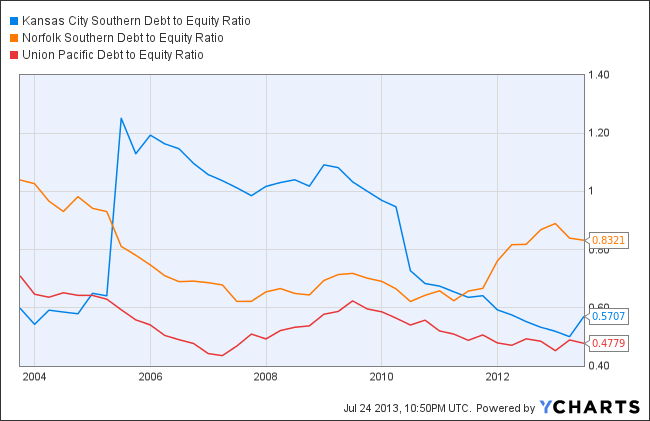 Now, Kansas City Southern (NYSE:KSU) is ready to funnel more cash flow to various growth opportunities. Analysts expect the company to be able to grow EPS at an annualized 15% over the next five years thanks to these growth initiatives.

The real beauty about Kansas City Southern (NYSE:KSU) is that it’s the only railroad company operating in both Mexico and the U.S. Its Mexico operations afford the company cheaper labor and transport costs. The company also has growth opportunities thanks to Mexico, where the company can ship raw materials into the country for processing and then “double dip” by returning the finished goods back to the U.S.

One of Norfolk’s biggest competing sectors is trucking in the Heartland region. One of its other key initiatives includes double-stacking intermodal containers, which will boost efficiency.

Norfolk got around 20% of revenue from intermodal in 2012, where growth from this segment offset weakness in coal; coal made up 26% of 2012 revenue.

Norfolk also has strong free cash flow that allows it to provide solid buybacks and dividends to investors. In 2012, the company upped its dividend payment by 12% and 6% — the company also has remaining authorization for repurchases of 22 million shares through 2014. Its balance sheet is also one of the top in the industry, with a debt-to-capital ratio of 45%.

Union Pacific Corporation (NYSE:UNP) is expected to grow revenue by 6% in 2013. The nice thing about Union Pacific is its mix of revenue. Energy accounted for 20% of revenue in 2012, intermodal 20%, industrial products 18%, chemicals 17%, agricultural products 17% and autos 9%.