Johnson & Johnson (JNJ): One Potential Roadblock for the Stock’s ‘Run-Up’

If you’re looking for a textbook example of a steady rise in shares, it doesn’t get much better than the current Johnson & Johnson (NYSE:JNJ) stock run-up.

Shares in the blue-chip company are up 15% year-to-date with a nice upward trend. 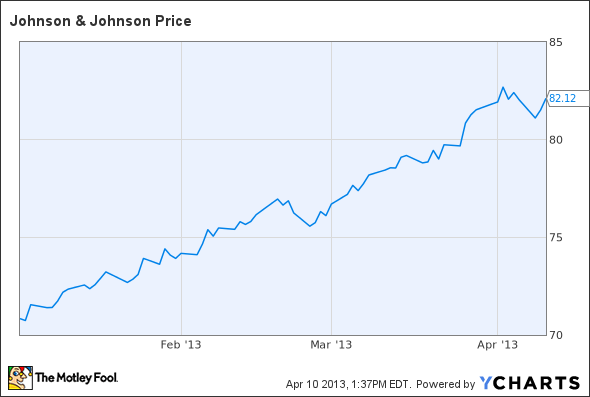 The chart definitely shows a good run for J&J. But could there be a roadblock ahead that will put a damper on these steady gains?

What won’t get in the way
There are several factors that could hurt other stocks that shouldn’t be an issue for Johnson & Johnson (NYSE:JNJ). For example. AbbVie Inc (NYSE:ABBV) is highly dependent on the success of one drug — Humira. Although sales for the blockbuster drug continue to experience solid growth, any blip would send AbbVie’s shares headed downward.

Johnson & Johnson (NYSE:JNJ)’s diversification prevents that type of problem from raising its ugly head. The company’s revenue is spread across three large operating segments. Its consumer segment brought in $14.4 billion in sales last year. J&J’s pharmaceuticals segment made $25.3 billion, with the biggest-selling drug, Remicade, accounting for only $6.1 billion of that total. The largest business segment, medical devices and diagnostics, generated $27.4 billion in 2012 revenue.

However, the company’s latest recall doesn’t seem to have fazed the stock. In late March, Johnson & Johnson (NYSE:JNJ) announced that it was pulling nearly 2 million glucose meters from the market after a patient in Europe died following a faulty blood sugar reading. Shares continued their upward path even after this recall announcement.

After a great start to 2013 and a gain of 27% over the last 12 months, some investors could be ready to take some profits. That’s more likely as we approach summer. Many still subscribe to the old “sell in May and go away” school of thought. Concerns about the employment outlook and global political uncertainties could also contribute to increased selling.

There’s also the dividend factor. Thanks to its stock appreciation, J&J’s dividend yield currently stands at its lowest point since 2010. Dividend-oriented investors might not be as attracted to the stock as they used to be.

The same goes for value investors. Johnson & Johnson (NYSE:JNJ)’s stock now sports a trailing price-to-earnings multiple of 21.  It hasn’t been this richly valued since 2006.

Running the distance
I wouldn’t be surprised to see the Johnson & Johnson (NYSE:JNJ) stock run halted in the near future. However, I think if it happens, it will be due more to profit-taking and macro events than any problems with the stock itself.

And any roadblocks that are encountered should only be temporary, in my view. Johnson & Johnson’s stock remains one to hold for the long run.

The article 1 Potential Roadblock for the Johnson & Johnson Stock Run-up originally appeared on Fool.com and is written by Keith Speights.