It’s Game Over for Zynga Inc (ZNGA): Time to Restart

Every game must surely end at some point, but it is less sure whether the player will emerge as the winner or lose out. At a point where the player is defeated, he chooses to either restart or opt out completely. Unfortunately for Zynga Inc (NASDAQ:ZNGA), the social gaming company seems to be losing the game. It finds itself in a situation where it must strategize carefully, to enhance its chances of surviving the next level. The competition is heating up, and the industry is taking a paradigm shift, from web-based games to mobile application games. This is shifting social media gaming to smartphones and tablets, and Zynga Inc (NASDAQ:ZNGA) must work hard to get into the act. 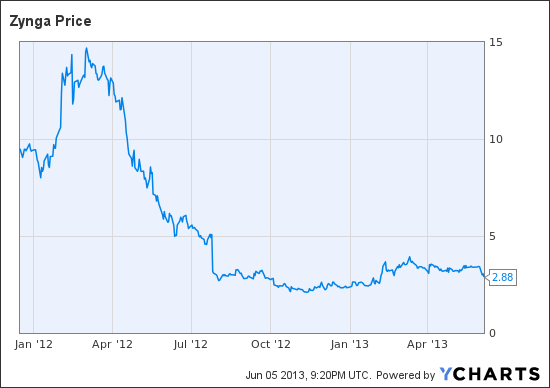 Zynga Inc (NASDAQ:ZNGA) has failed to breach the $4 mark since July 25 last year, which is quite a slump considering that it did trade north of $14 during Q1, 2012. At its current price of about $3 a share, the company is down 70% from its 2011 IPO price of $10. The most difficult part is that the company seems to be ever sliding, rather than offering investors something to believe in, a lease of life. However, the company has adopted a strategy of cutting costs, coupled with ambitious bets on Real Money Gaming, Mobile and revenue from its website (zynga.com). These bets present the faintest of hopes for a turnaround, while the slimming up seems seems set to help the company save on costs.

From 2010-2011, Zynga Inc (NASDAQ:ZNGA) was at the peak of its business: the company reported billings of $839 million during fiscal year 2010. The following year was equally impressive as revenues increased to $1.14 billion, and then the company went public via an IPO. The year 2012 was the beginning of Zynga’s fall from grace, as the transition to smartphones and tablets reached top gear. People now prefer to undertake their computing tasks using mobile devices, which threaten rendering the PC industry obsolete. People are now playing games via mobile applications, hence shifting from Zynga’s stronghold, the Facebook Inc (NASDAQ:FB) platform.

When Zynga Inc (NASDAQ:ZNGA) was at its peak, Facebook Inc (NASDAQ:FB), the social gaming company’s main platform for engaging players, was the benchmark of social gaming platforms. However, the shift to mobile gadgets has created a swing in taste, with gamers now preferring the mobile platforms. Unfortunately for Zynga, Facebook is yet to build a commanding ground similar to its web-based platform. Additionally, Facebook has also changed significantly the way games appear on its sponsored stories listing. Initially, it used to be the most popular, but now it is the most recent that appear first. This gives other companies like Electronic Arts Inc. (NASDAQ:EA) an opportunity to challenge Zynga’s Farmville, its most famous game on Facebook.

The Facebook platform has been Zynga’s sole breadwinner for the better part of its five year history. Approximately 90% of the social gaming company’s revenue came via the social media giant over the last three years, bar 2012. However, this has since changed, with revenues received via the platform diminishing subsequently, every quarter. Zynga has tried to up its game on the mobile platform gaming by acquiring a selection of small companies over the last year. In 2012 the company made a $200 million acquisition of OMGPOP, which operated in the mobile space. However, it seems this did not pay off, as witnessed with the closure of OMGPOP. The unit’s closure came consequently as part of the restructuring plan being implemented, which also saw more than 500 staff or 18% of the total workforce (2,800 employees) lose their jobs.