Every investor can appreciate a stock that consistently beats the Street without getting ahead of its fundamentals and risking a meltdown. The best stocks offer sustainable market-beating gains, with improving financial metrics that support strong price growth. Let’s take a look at what The Procter & Gamble Company (NYSE:PG)‘s recent results tell us about its potential for future gains.

What the numbers tell you
The graphs you’re about to see tell The Procter & Gamble Company (NYSE:PG)’s story, and we’ll be grading the quality of that story in several ways.

Growth is important on both top and bottom lines, and an improving profit margin is a great sign that a company’s become more efficient over time. Since profits may not always reported at a steady rate, we’ll also look at how much The Procter & Gamble Company (NYSE:PG)’s free cash flow has grown in comparison to its net income.

A company that generates more earnings per share over time, regardless of the number of shares outstanding, is heading in the right direction. If The Procter & Gamble Company (NYSE:PG)’s share price has kept pace with its earnings growth, that’s another good sign that its stock can move higher.

Is The Procter & Gamble Company (NYSE:PG) managing its resources well? A company’s return on equity should be improving, and its debt-to-equity ratio declining, if it’s to earn our approval.

Healthy dividends are always welcome, so we’ll also make sure that P&G’s dividend payouts are increasing, but at a level that can be sustained by its free cash flow.

By the numbers
Now, let’s take a look at P&G’s key statistics: 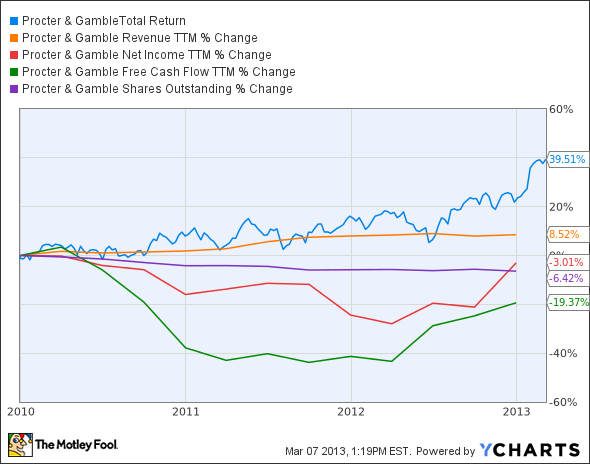 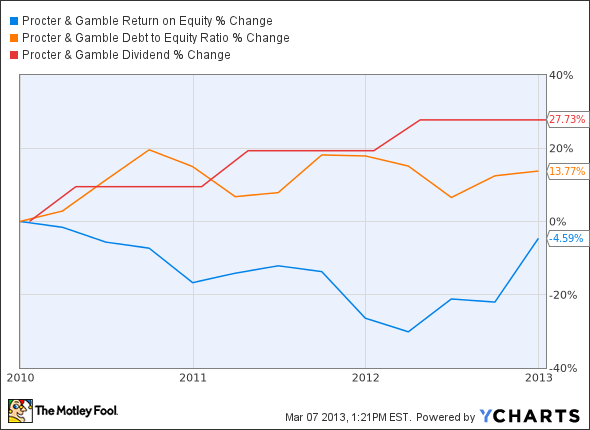 How we got here and where we’re going
P&G doesn’t put forth a particularly compelling argument for its stock today. Nearly all of its price growth has been the result of higher valuations, which makes future returns far from certain and which contributes to several of its failing grades. Can P&G turn its drifting ship around and reclaim some positive momentum this year — and possibly earn more than just three out of nine passing grades the next time we examine it?

As a component on the Dow Jones Industrial Average (Dow Jones Indices:.DJI), P&G isn’t really expected to be a growth stock. It’s more than a century old, after all. However, this year it’s returned roughly double the index’s gain, helping the Dow to a fresh all-time high in the process. The Procter & Gamble Company (NYSE:PG)’s most recent quarter was better than expected, as core earnings actually grew by double digits, so this rise wasn’t wholly unjustified.

My fellow Fool Asit Sharma points out that this one quarter doesn’t erase P&G’s near-term problems, which include shrinking gross margins over the past few years and a massive amount of liabilities stemming from its 2005 Gillette acquisition that has never really been addressed since. Despite generating massive amounts of operating cash flow, P&G’s balance sheet is shrinking, and as you’ve already seen, the company is barely growing its revenue at all. If we’d have looked back at 2008 instead of 2009 as a starting point, P&G’s top line would be smaller. Contrast that with peers Kimberly Clark Corp (NYSE:KMB) and Colgate-Palmolive Company (NYSE:CL) , which Asit points out have increased revenue 2.5% and 2.9% per year over the same time frame, respectively.

If not for the fourth quarter, The Procter & Gamble Company (NYSE:PG)’s bottom line would look much worse. When I examined The Clorox Company (NYSE:CLX) last year using this assessment, I found that P&G’s net income had fallen by 23% in the three-year period ending on the third quarter. Clorox, which was slightly cheaper and had seen slightly more share growth, had only seen a 4% decline in net income over that period — which remains at about the same level today due to a higher starting point in 2009’s fourth quarter. Its bottom line didn’t grow as quickly as P&G’s, but do you expect P&G to post a 23% year-over-year gain in trailing 12-month net income with any regularity? Much of that was the result of cost cuts and price hikes, as Demitrios Kalogeropoulos pointed out a month ago — and big growth last quarter was also partially the result of returning to a baseline abandoned last year as the company’s net income fell by similar levels.

P&G isn’t managing the same rate of volume growth as Unilever plc (ADR) (NYSE:UL), at least in its personal-care business. In fact, all of the growth in that segment was price-driven. That helped increase margins this past quarter, but price hikes can’t be made every quarter. Unilever’s personal-care division saw 7.2% volume growth, which is a more sustainable path to long-term gains. Last year, as inflation grew 1.7% year over year, P&G mustered 3% organic sales growth. That’s a 1.3% inflation-adjusted growth rate. If inflation reverts back to the 3% growth it posted in 2011, P&G’s 2% to 4% sales growth target range will simply be keeping up with rising prices — some of which, as we’ve already seen, is driven by P&G itself.

P&G isn’t going away any time soon, but there may not be much upside left after years of a rising valuation driving share price growth.

Putting the pieces together
Today, The Procter & Gamble Company (NYSE:PG) has some of the qualities that make up a great stock, but no stock is truly perfect. Digging deeper can help you uncover the answers you need to make a great buy — or to stay away from a stock that’s going nowhere.

The article Is Procter & Gamble Destined for Greatness? originally appeared on Fool.com and is written by Alex Planes.

Fool contributor Alex Planes has no position in any stocks mentioned. The Motley Fool recommends Kimberly-Clark, Procter & Gamble, and Unilever.

The Top 3 Stocks in the Dow’s Record Week: The Boeing Company (BA), Cisco...