Is the Boss Really Worth What They’re Paid? The Good and the Bad of CEO Salaries

Consumers and investors alike are starting to question just how responsible companies are when it comes to the environment, social or governance (ESG) issues. In line with this, sustainably-minded investors are questioning the sometimes over-inflated compensation packages that many CEOs are receiving.

When thinking about ESG (environmental, social and governance) issues, internal corporate behavior can sometimes take center stage. One part of corporate governance behavior is executive compensation. It is clear that CEO pay has been increasing at an alarming rate when compared to the average worker.  Is it warranted though?  In some cases, perhaps, but as you can see in this post, there are numerous examples of CEOs making millions when their shareholders are losing big.

According to a recent study put out by the Economic Policy Institute, chief executives at America’s 350 biggest companies were paid 231 times as much as the average private-sector worker in 2011. Unbelievably in 1978, CEOs took home only 26.5 times more than the average worker.

Granted, compensation for a job well done can be warranted, but many shareholders have lost value in their stock position while their CEOs pull in millions.  Some companies that have paid their CEOs lavishly while their stock price has plummeted include:

Press “play” on Kapitall’s Compar-O-Matic to see how CEO compensation for the stocks listed above has changed in the past two years. 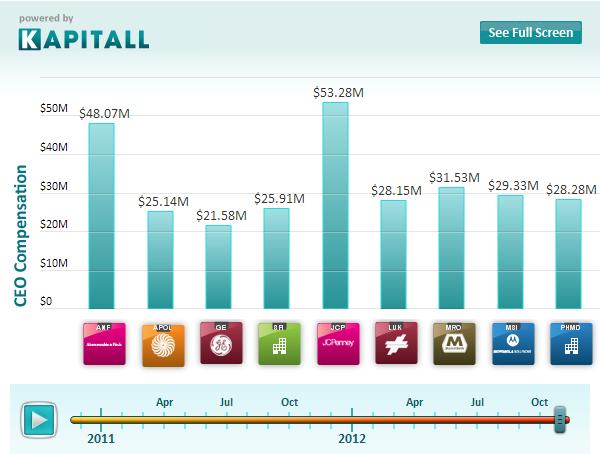 On the other end of the spectrum the following companies have some of the lowest compensated CEOs and have brought healthy 5-year returns to their investors:

Press “play” on Kapitall’s Compar-O-Matic to see how CEO compensation for the stocks listed above has changed in the past two years.’ 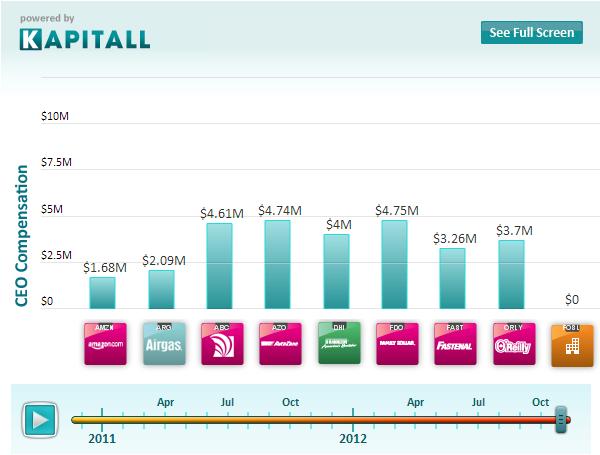 ‘Tis the Season: CEOs in Retail

In light of this shopping season, below we can see which clothing retailers are returning shareholder value along with keeping CEO compensation to a minimum (Gap, Foot Locker) and also the companies who are poor performers when it comes to shareholder return and excessive CEO pay (JC Penney and Abercrombie and Fitch).

Using Kapitall Compar-O-Matic tool, here is a comparison of the CEO compensation against one-year returns on stock price in the retail sector: 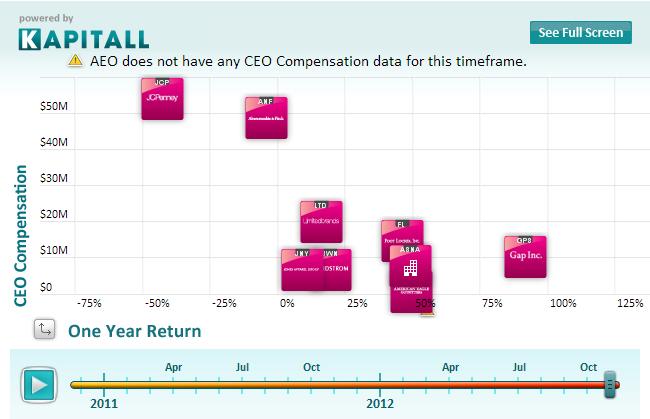 This article was originally written by Dale Wannen, and posted on Kapitall.