Looking for high-potential stocks? Just follow the big players within the hedge fund industry. Why should you do so? Let’s take a brief look at what statistics have to say about hedge funds’ stock picking abilities to illustrate. The Standard and Poor’s 500 Index returned approximately 7.6% in the 12 months ending November 21, with more than 51% of the stocks in the index failing to beat the benchmark. Therefore, the odds that one will pin down a winner by randomly picking a stock are less than the odds in a fair coin-tossing game. Conversely, best performing hedge funds’ 30 preferred mid-cap stocks generated a return of 18% during the same 12-month period. Coincidence? It might happen to be so, but it is unlikely. Our research covering a 17-year period indicates that hedge funds’ stock picks generate superior risk-adjusted returns. That’s why we believe it is wise to check hedge fund activity before you invest your time or your savings on a stock like Southern Co (NYSE:SO).

Southern Co (NYSE:SO) investors should pay attention to a decrease in hedge fund sentiment in recent months. SO was in 20 hedge funds’ portfolios at the end of September. There were 21 hedge funds in our database with SO holdings at the end of the second quarter. The level and the change in hedge fund popularity aren’t the only variables you need to analyze to decipher hedge funds’ perspectives. A stock may witness a boost in popularity but it may still be less popular than similarly priced stocks. That’s why at the end of this article we will examine companies such as American Tower Corp (NYSE:AMT), UBS AG (USA) (NYSE:UBS), and Dominion Resources, Inc. (NYSE:D) to gather more data points.

What have hedge funds been doing with Southern Co (NYSE:SO)?

At the end of the third quarter, a total of 20 of the hedge funds tracked by Insider Monkey were long this stock, a 5% dip from one quarter earlier. Below, you can check out the change in hedge fund sentiment towards SO over the last 5 quarters, which shows sentiment peaking at the halfway point of this year. With hedge funds’ sentiment swirling, there exists a few key hedge fund managers who were boosting their stakes significantly (or already accumulated large positions). 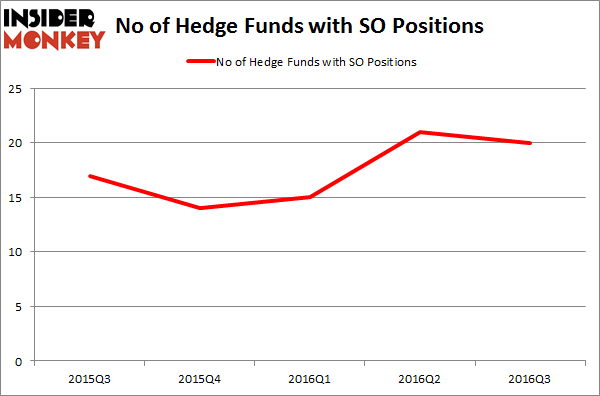 According to publicly available hedge fund and institutional investor holdings data compiled by Insider Monkey, AQR Capital Management, founded by Cliff Asness, holds the largest position in The Southern Company (NYSE:SO). AQR Capital Management has a $110.2 million position in the stock. The second most bullish fund manager is Zimmer Partners, led by Stuart J. Zimmer, holding a $93 million position; the fund has 2.5% of its 13F portfolio invested in the stock. Some other peers with similar optimism encompass Jim Simons’ Renaissance Technologies, Jonathan Barrett and Paul Segal’s Luminus Management, and Peter Rathjens, Bruce Clarke and John Campbell’s Arrowstreet Capital. We should note that two of these hedge funds (Zimmer Partners and Luminus Management) are among our list of the 100 best performing hedge funds which is based on the performance of their 13F long positions in non-microcap stocks.

Now that we’ve mentioned the most bullish investors, let’s also take a look at some funds that cut their entire stakes in the stock during the third quarter. It’s worth mentioning that Benjamin A. Smith’s Laurion Capital Management cut the biggest investment of the 700 funds followed by Insider Monkey, comprising about $80.4 million in call options. Glenn Russell Dubin’s fund, Highbridge Capital Management, also cut its stock, about $37.2 million worth.

As you can see these stocks had an average of 32 hedge funds with bullish positions and the average amount invested in these stocks was $1.58 billion. That figure was $568 million in SO’s case. Express Scripts Holding Company (NASDAQ:ESRX) is the most popular stock in this table. On the other hand UBS AG (USA) (NYSE:UBS) is the least popular one with only 8 bullish hedge fund positions. The Southern Company (NYSE:SO) is not the least popular stock in this group but hedge fund interest is still below average. This is a slightly negative signal and we’d rather spend our time researching stocks that hedge funds are piling on. In this regard ESRX might be a better candidate to consider taking a long position in.

Best Performing Hedge Funds Strategy
Download a free copy of our newsletter and see the details inside!
Hedge Fund Resource Center
Related News
Scout Daily Update: Dallas Fed Down 22 Straight Months Which Is the Better Valuation Metric? The P/E Ratio or the PEG Ratio: Part 1 10 Stocks That Had Their Price Targets Raised Tuesday Duquesne Family Office Goes On a Buying Spree The 10 Best Dividend Stocks For Retirement Southern Co (SO): Uninterrupted Dividends Since 1949 and a 4.4% Yield Hedge Funds Hate These 10 Large-Caps, Part 1 5 Countries That Have the Most Drones 6 Best Smartphones with Optical Zoom 10 Highest Rated Backpacking Tents
Billionaire Hedge Funds