Every investor can appreciate a stock that consistently beats the Street without getting ahead of its fundamentals and risking a meltdown. The best stocks offer sustainable market-beating gains, with improving financial metrics that support strong price growth. Let’s take a look at what Skyworks Solutions Inc (NASDAQ:SWKS)‘ recent results tell us about its potential for future gains.

What the numbers tell you
The graphs you’re about to see tell Skyworks’ story, and we’ll be grading the quality of that story in several ways.

Growth is important on both top and bottom lines, and an improving profit margin is a great sign that a company’s become more efficient over time. Since profits may not always reported at a steady rate, we’ll also look at how much Skyworks’ free cash flow has grown in comparison to its net income.

A company that generates more earnings per share over time, regardless of the number of shares outstanding, is heading in the right direction. If Skyworks’ share price has kept pace with its earnings growth, that’s another good sign that its stock can move higher.

Is Skyworks managing its resources well? A company’s return on equity should be improving, and its debt-to-equity ratio declining, if it’s to earn our approval.

By the numbers
Now, let’s take a look at Skyworks’ key statistics: 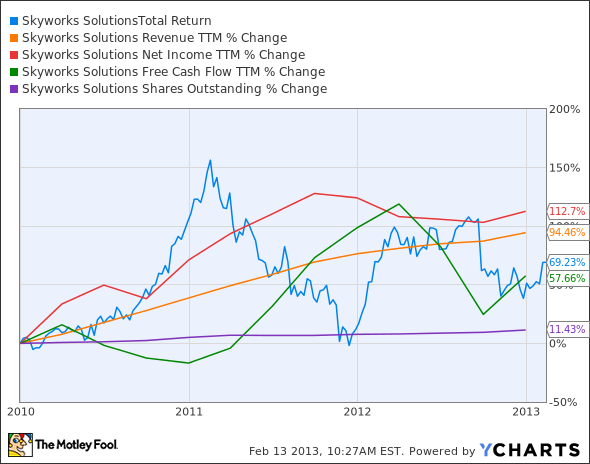 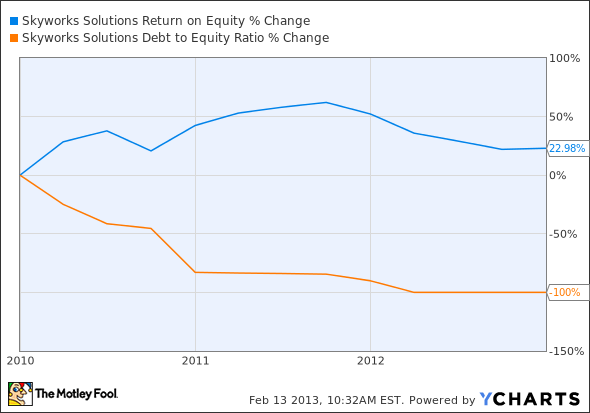 How we got here and where we’re going
Skyworks pulls through with a strong six-out-of-seven performance, missing on its free cash flow growth comparison due to a drop that took place through 2012. From the looks of it, Skyworks can recover in 2013 and possibly become one of the rare companies to earn a perfect score. Let’s take a closer look at Skyworks’ major efforts for the recent past and the coming year to determine if it’s going to stay on the path to perfection.

Skyworks has had a rough ride through 2012. Its shares peaked right before the release of Apple Inc. (NASDAQ:AAPL)‘s iPhone 5, and with good cause — Apple is one of Skyworks’ biggest customers, and any decision out of Cupertino to add to or reduce the component-supply relationship will have an outsized effect on Skyworks’ fortunes. But, as shareholders have come to realize, even a successful Apple can be a drag, simply because sky-high expectations are baked into the deal now. Days after my colleague Sean Williams wrote about Skyworks’ 52-week peak, fellow Fool Anders Bylund had to step in and scratch his head over the bewildering drop that followed what seemed like an otherwise positive guidance update.

Of course, everything isn’t peachy in the Empire of Apple lately. The price of supplying Apple with the pieces it needs appears to be on the rise, as Skyworks just hasn’t produced the bottom-line (or free cash flow) growth investors had been expecting. This appears to be a growing trend in the industry, since RF Micro Devices, Inc. (NASDAQ:RFMD) and TriQuint Semiconductor (NASDAQ:TQNT) both endured worse profit slides than Skyworks in the iPhone launch quarter.

However, when it comes to long-term potential, Skyworks might have these two competitors beat. Sean Williams points out that RF Micro remains more dependent on producing components for the outdated (and thus ultimately doomed) 2G/3G wireless standards, and TriQuint just doesn’t have the same production capabilities as Skyworks has to muster big orders in small timeframes. Skyworks is certainly more profitable than either, as it’s the only one of the three to boast a positive P/E ratio.

Investing in Skyworks today seems to be a statement of belief in Apple, since the two companies are so closely aligned. Although a bit less than 30% of Skyworks’ sales go toward building Apple products, that’s still a huge amount of dependence on one company that — let’s face it — has settled into producing iterative upgrades to its moneymakers for the last three years. Should consumer habits shift, Skyworks might be left out in the cold.

Putting the pieces together
Today, Skyworks has many of the qualities that make up a great stock, but no stock is truly perfect. Digging deeper can help you uncover the answers you need to make a great buy — or to stay away from a stock that’s going nowhere.

The article Is Skyworks Solutions Destined for Greatness? originally appeared on Fool.com and is written by Alex Planes.

Fool contributor Alex Planes holds no financial position in any company mentioned here. Add him on Google+ or follow him on Twitter @TMFBiggles for more insight, and occasional attempts at comedy.The Motley Fool recommends Apple. The Motley Fool owns shares of Apple and TriQuint Semiconductor.