Rite Aid Corporation (NYSE:RAD) is up 130% year to date. But how is it possible that a company much weaker than its peers can make such a significant move over such a short time frame?

When companies trading in the low-to-mid single digits make significant improvements to their business models, the upside potential is enormous. Sometimes this comes in the form of renewed growth, but those situations are rare. In most cases, such as Rite Aid’s, the gains owe to cost-cutting. But has Rite Aid done enough to make this upside move sustainable? And is this company the best investing option in its sector?

In 2012, Rite Aid Corporation (NYSE:RAD)’s revenue declined, but it finally turned a profit. On a shorter-term basis, Rite Aid has now delivered two consecutive profitable quarters. Rite Aid’s best move was to close underperforming stores. This has allowed for more capital to go toward better-performing locations.

However, same-store sales haven’t impressed. Same-store sales declined 2.5% last quarter on a year over year basis. So far this year, the pharmacy performance has been subpar, but the front-end (convenience store items) has shown modest improvements.

The main reason the pharmacy has been performing poorly has been generic drug introduction costs. However, this is a worthwhile sacrifice for Rite Aid Corporation (NYSE:RAD). Generic drugs have higher margins than prescription drugs, thanks to their low cost.

Generic drugs have been gaining popularity at a rapid rate for several reasons: weak consumer purchase power, health-care changes, and an aging baby boomer generation. Baby boomers will require more medicine as they age. This is a big plus for Rite Aid, and it’s a reason why Rite Aid is likely to further expand its generic drug offerings. It should also be noted that pharmacy sales at Rite Aid often represent 65% to 70% of sales.

As far as front-end sales go, the front-end has always been looked at as an extra way to boost sales. If Rite Aid can continue to show growth in this area, then it would be a big bonus.

But is Rite Aid the best option? 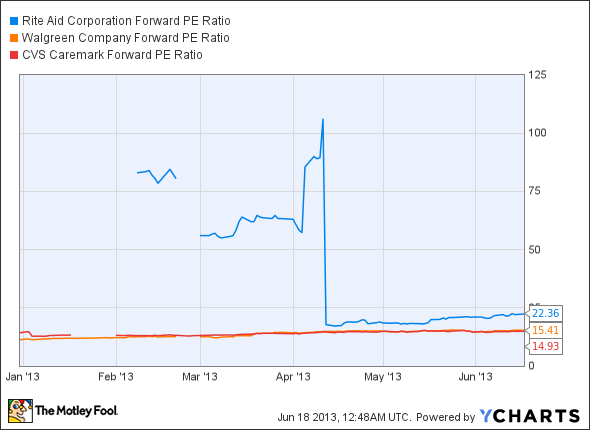