Is Lindsay Corporation (LNN) A Good Stock To Buy?

The 700+ hedge funds and money managers tracked by Insider Monkey have already compiled and submitted their 13F filings for the third quarter, which unveil their equity positions as of September 30. We went through these filings, fixed typos and other more significant errors and identified the changes in hedge fund positions. Our extensive review of these public filings is finally over, so this article is set to reveal the smart money sentiment towards Lindsay Corporation (NYSE:LNN).

Lindsay Corporation (NYSE:LNN) has experienced a decrease in enthusiasm from smart money in recent months. There were 8 hedge funds in our database with LNN holdings at the end of the previous quarter. The level and the change in hedge fund popularity aren’t the only variables you need to analyze to decipher hedge funds’ perspectives. A stock may witness a boost in popularity but it may still be less popular than similarly priced stocks. That’s why at the end of this article we will examine companies such as Triangle Capital Corporation (NYSE:TCAP), U.S. Physical Therapy, Inc. (NYSE:USPH), and Griffon Corporation (NYSE:GFF) to gather more data points.

With all of this in mind, we’re going to take a gander at the new action surrounding Lindsay Corporation (NYSE:LNN).

What does the smart money think about Lindsay Corporation (NYSE:LNN)? 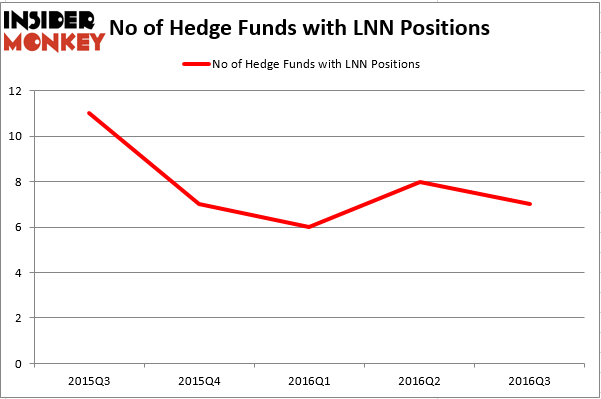 When looking at the institutional investors followed by Insider Monkey, Royce & Associates, led by Chuck Royce, holds the biggest position in Lindsay Corporation (NYSE:LNN). According to regulatory filings, the fund has a $74.7 million position in the stock, comprising 0.5% of its 13F portfolio. Coming in second is Impax Asset Management, led by Ian Simm, which holds a $29.5 million position; the fund has 1.3% of its 13F portfolio invested in the stock. Other members of the smart money with similar optimism comprise Renaissance Technologies, one of the largest hedge funds in the world, Mario Gabelli’s GAMCO Investors and Ken Griffin’s Citadel Investment Group. We should note that Impax Asset Management is among our list of the 100 best performing hedge funds which is based on the performance of their 13F long positions in non-microcap stocks.

We already know that not all hedge funds are bullish on the stock and some hedge funds actually dropped their positions entirely. At the top of the heap, Ken Griffin’s Citadel Investment Group dropped the biggest stake of all the hedgies followed by Insider Monkey, worth close to $0.9 million in call options. Israel Englander’s fund, Millennium Management, also dumped its stock, about $0.5 million worth of Lindsay Corporation (NYSE:LNN) shares.

As you can see these stocks had an average of 13 hedge funds with bullish positions and the average amount invested in these stocks was $86 million. That figure was $132 million in LNN’s case. MINDBODY Inc (NASDAQ:MB) is the most popular stock in this table. On the other hand Triangle Capital Corporation (NYSE:TCAP) is the least popular one with only 6 bullish hedge fund positions. Lindsay Corporation (NYSE:LNN) is not the least popular stock in this group but hedge fund interest is still below average. This is a slightly negative signal and we’d rather spend our time researching stocks that hedge funds are piling on. In this regard MB might be a better candidate to consider taking a long position in.