Legendary investors such as Leon Cooperman and Seth Klarman earn enormous amounts of money for themselves and their investors by doing in-depth research on small-cap stocks that big brokerage houses don’t publish. Small cap stocks -especially when they are screened well- can generate substantial outperformance versus a boring index fund. That’s why we analyze the activity of those successful funds in these small-cap stocks. In the following paragraphs, we analyze GTx, Inc. (NASDAQ:GTXI) from the perspective of those successful funds.

GTx, Inc. (NASDAQ:GTXI) investors should pay attention to an increase in hedge fund interest of late. There were 3 hedge funds in our database with GTXI holdings at the end of the previous quarter. The level and the change in hedge fund popularity aren’t the only variables you need to analyze to decipher hedge funds’ perspectives. A stock may witness a boost in popularity but it may still be less popular than similarly priced stocks. That’s why at the end of this article we will examine companies such as Psychemedics Corp. (NASDAQ:PMD), Manning and Napier Inc (NYSE:MN), and Cell Therapeutics Inc (NASDAQ:CTIC) to gather more data points.

Keeping this in mind, we’re going to check out the fresh action regarding GTx, Inc. (NASDAQ:GTXI).

What have hedge funds been doing with GTx, Inc. (NASDAQ:GTXI)? 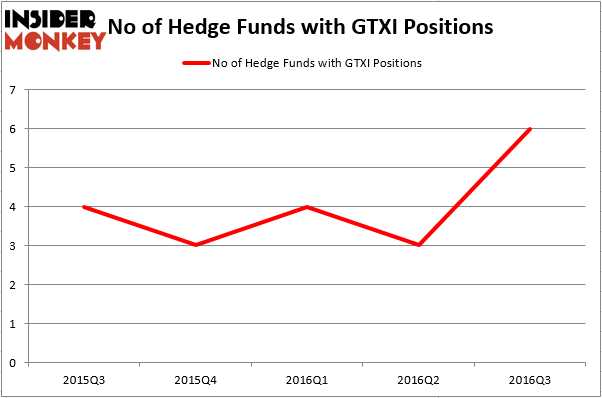 According to publicly available hedge fund and institutional investor holdings data compiled by Insider Monkey, Biotechnology Value Fund / BVF Inc, led by Mark Lampert, holds the biggest position in GTx, Inc. (NASDAQ:GTXI). According to regulatory filings, the fund has a $9 million position in the stock, comprising 1.7% of its 13F portfolio. Coming in second is D E Shaw, one of the largest hedge funds in the world, with a $0.1 million position; the fund has less than 0.1% of its 13F portfolio invested in the stock. Other peers with similar optimism encompass Jim Simons’s Renaissance Technologies, Ken Griffin’s Citadel Investment Group and Paul Tudor Jones’s Tudor Investment Corp. We should note that none of these hedge funds are among our list of the 100 best performing hedge funds which is based on the performance of their 13F long positions in non-microcap stocks.

As one would reasonably expect, some big names were leading the bulls’ herd. Jim Simons’ Renaissance Technologies established the most outsized position in GTx, Inc. (NASDAQ:GTXI). According to its latest 13F filing, the fund had $0.1 million invested in the company at the end of the quarter. Ken Griffin’s Citadel Investment Group also made a $43,000 investment in the stock during the quarter. The only other fund with a brand new GTXI position is Israel Englander’s Millennium Management.

As you can see these stocks had an average of 7 hedge funds with bullish positions and the average amount invested in these stocks was $14 million. That figure was $9 million in GTXI’s case. Manning and Napier Inc (NYSE:MN) is the most popular stock in this table. On the other hand Psychemedics Corp. (NASDAQ:PMD) is the least popular one with only 5 bullish hedge fund positions. GTx, Inc. (NASDAQ:GTXI) is not the least popular stock in this group but hedge fund interest is still below average. This is a slightly negative signal and we’d rather spend our time researching stocks that hedge funds are piling on. In this regard MN might be a better candidate to consider taking a long position in.