Koninklijke Philips Electronics NV (ADR) (NYSE:PHG) and GE compete with each other in the healthcare and consumer products market. Philips’ consumer products, which include the Sonicare toothbrush, SmartTouch/Speed-XL shavers and Senseo coffee maker, have been well-received worldwide – especially in China and Eastern Europe.

Philips’ healthcare segment includes medical products, such as x-ray and ultrasound machines. It also owns Lifeline Systems, a North American personal emergency response system, as well as Avent, a producer of infant care products in the U.K. and the U.S.

While Koninklijke Philips Electronics NV (ADR) (NYSE:PHG)’s healthcare and consumer products divisions have reported promising growth over the past decade, it is still struggling with maintaining margins. During the fourth quarter, Philips’ profit margin dipped to -2.19%, while GE’s strengthened to 11.32%.

Although Siemens AG (ADR) (NYSE:SI) is more diversified than Philips, it is not as diversified as GE. Still, Siemens competes with GE in the key sectors of healthcare, industry and energy.

During the fourth quarter, Siemens AG (ADR) (NYSE:SI) reported a profit margin of 7.14%, faring better than Philips but worse than GE.

To better gauge the future growth potential of these three companies, we need to look at three things: its stock fundamentals compared to its top and bottom line growth over the past three years.

Fundamentally, GE isn’t the best value in any category except for its profit margin, but its valuation is still fairly cheap. However, that debt to equity ratio of 322.30 tells us that GE still has very high debt of $414.06 billion, while it only has $77.36 billion of cash on hand.

However, GE sold off its remaining 49% stake in NBCUniversal to Comcast Corporation (NASDAQ:CMCSA) for $16.7 billion last month, which should help boost its near-term cash flow. 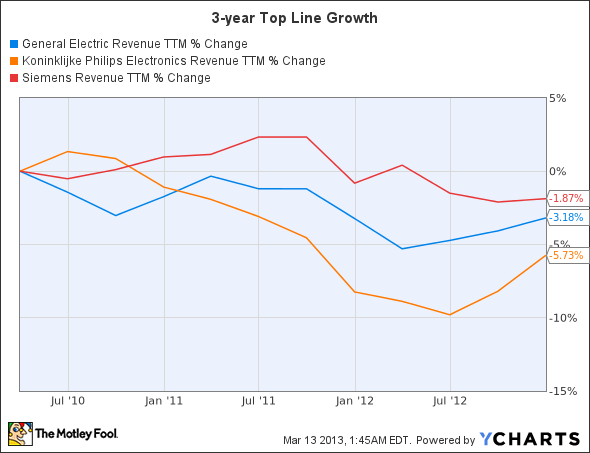 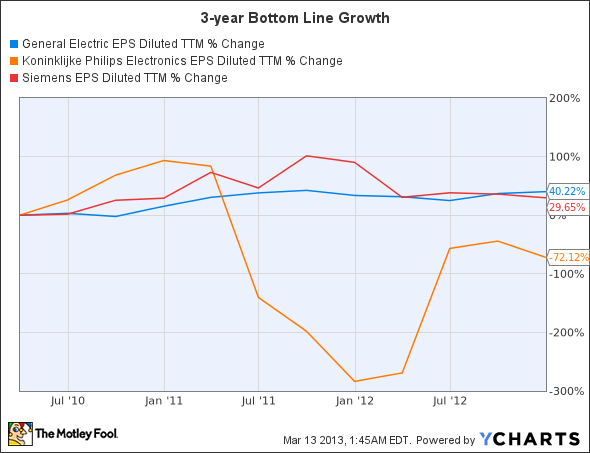 Although GE’s top line has been declining over the past three years, it has started to post positive revenue growth over the past 12 months. GE’s bottom line growth has also comfortably outpaced its peers, as a result of its stronger margins. That indicates that GE’s debt level, while high, is manageable if the company maintains its current growth trajectory.

Strong demand for industrial products along with its paired financing options, should continue to boost top and bottom line growth in 2013. If GE downsizes its financial arm, I expect its healthcare segment to start posting more robust growth to offset those losses. In other words, although GE may be burning bright now, I believe it can burn even brighter.

The article Is General Electric Burning Bright or Burning Out? originally appeared on Fool.com and is written by Leo Sun.

How the Dow Chalked Up Another Win: The Boeing Company (BA), Coca-Cola (KO),...

The Boeing Company (BA) Takes Off With the Dow: United Technologies Corporation...