Is Bank of Nova Scotia (BNS) A Good Stock To Buy?

Earlier this year, many hedge funds were holding a larger percentage of their assets in cash than at any other time in recent memory, as fears that the market was due for a correction abounded. This led to many small-cap stocks being hit hard, as hedge funds, which tend to be some of their staunchest backers, liquidated their holdings. Now however, hedge funds appear to be growing more confident and putting their money back into equities, which has led to small-cap stocks taking off, with the Russell 2000 ETF (IWM) having outperformed the S&P 500 ETF (SPY) by more than 10 percentage points since the end of June. In this article, we’ll see how this large shift in hedge fund activity impacted Bank of Nova Scotia (NYSE:BNS).

Is Bank of Nova Scotia (NYSE:BNS) undervalued? Hedge funds are in a bearish mood. The number of bullish hedge fund positions that are disclosed in regulatory 13F filings decreased by 1 recently. BNS was in 14 hedge funds’ portfolios at the end of the third quarter of 2016. There were 15 hedge funds in our database with BNS holdings at the end of the previous quarter. At the end of this article we will also compare BNS to other stocks including Eni SpA (ADR) (NYSE:E), National Grid plc (ADR) (NYSE:NGG), and Thermo Fisher Scientific Inc. (NYSE:TMO) to get a better sense of its popularity.

How are hedge funds trading Bank of Nova Scotia (NYSE:BNS)?

At the end of the third quarter, a total of 14 of the hedge funds tracked by Insider Monkey held long positions in this stock, a 7% dip from one quarter earlier. The graph below displays the number of hedge funds with bullish position in BNS over the last 5 quarters, which has generally trended down. So, let’s check out which hedge funds were among the top holders of the stock and which hedge funds were making big moves. 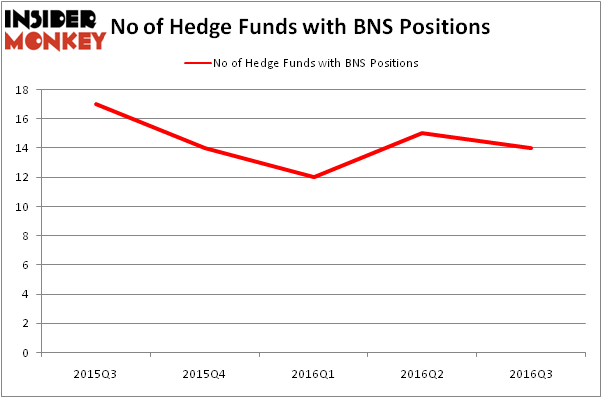 According to publicly available hedge fund and institutional investor holdings data compiled by Insider Monkey, Daniel Bubis’ Tetrem Capital Management has the number one position in Bank of Nova Scotia (NYSE:BNS), worth close to $128.5 million, corresponding to 4.8% of its total 13F portfolio. Coming in second is AQR Capital Management, led by Cliff Asness, holding a $79.4 million position. Other hedge funds and institutional investors with similar optimism encompass Jim Simons’ Renaissance Technologies, John Overdeck and David Siegel’s Two Sigma Advisors, and David E. Shaw’s D E Shaw. We should note that none of these hedge funds are among our list of the 100 best performing hedge funds which is based on the performance of their 13F long positions in non-microcap stocks.

Because Bank of Nova Scotia (NYSE:BNS) has sustained bearish sentiment from the entirety of the hedge funds we track, it’s easy to see that there lies a certain “tier” of hedge funds that slashed their entire stakes heading into Q4. At the top of the heap, Ken Griffin’s Citadel Investment Group sold off the biggest position of all the hedgies tracked by Insider Monkey, worth an estimated $2.1 million in call options, and Peter Rathjens, Bruce Clarke and John Campbell’s Arrowstreet Capital was right behind this move, as the fund sold off about $1.1 million worth of shares.

As you can see these stocks had an average of 28 hedge funds with bullish positions and the average amount invested in these stocks was $1.65 billion. That figure was $273 million in BNS’s case. Time Warner Inc (NYSE:TWX) is the most popular stock in this table. On the other hand Eni SpA (ADR) (NYSE:E) is the least popular one with only 4 bullish hedge fund positions. Bank of Nova Scotia (NYSE:BNS) is not the least popular stock in this group but hedge fund interest is still below average. This is a slightly negative signal and we’d rather spend our time researching stocks that hedge funds are piling on. In this regard TWX might be a better candidate to consider taking a long position in.