It’s inevitable and undeniable that Apple Inc. (NASDAQ:AAPL) growth is slowing. In fact, a few years from now, sales of iPhones, iPads and other hardware could slow to single digits. 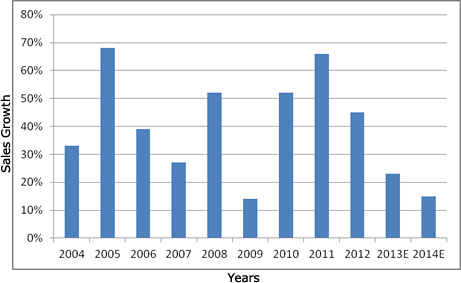 Consider that Apple Inc. (NASDAQ:AAPL)’s sales have grown at least 20% in eight of the past nine years. This amazing growth should happen again in the current fiscal year that began in October. But after that, Apple’s days of 20%-plus sales growth may be over. That’s what happens when a company’s revenue base starts to approach $200 billion.

Make no mistake, boosting sales from under $10 billion in fiscal (September) 2004 to a projected $192 billion in the current year is the key factor behind Apple Inc. (NASDAQ:AAPL)’s ever-rising stock price. But in the years ahead, it will be another factor that will help propel shares to fresh heights.

That factor: rising recurring revenue per user. We’ve known all along that Apple Inc. (NASDAQ:AAPL)’s main goal was to seed the world with its hardware, so it can eventually sell software and services. The highly popular iTunes music service was just the beginning. The iPad, with its expanding level of apps and video offerings is just another leg. An Apple-based TV, rumored to launch in coming months, is the final leg to the stool.

Once all of these hardware platforms are in place, expect to hear a lot more about how Apple Inc. (NASDAQ:AAPL)intends to become your home entertainment center, virtually replacing the cable TV connection upon which millions of Americans have come to rely. Apple will deliver a competitively-priced suite of video, audio and gaming services likely to rival what the average consumer now pays for a monthly, premium cable TV package (assuming they “cut the cord” from cable TV, as Apple hopes).

To be sure, the broad-based hardware platform needed by consumers is quickly coming into place. In effect, Apple Inc. (NASDAQ:AAPL) has begun to see saturation in the market for iPhones. Soon that could be the case for iPads, and eventually will be the case for its anticipated TV. Indeed, you could argue that a fully-saturated hardware base might mean outright revenue declines for Apple in this area.

Yet flat or declining sales for hardware will be more than offset by quickly-rising recurring software sales. In effect, the top-line growth is likely to cool, but a shift away from hardware should help margins, which means Apple’s bottom-line should keep growing at a solid clip. The challenge for management is to clearly articulate how profit margins for the anticipated TV sets will be so-so at best, but will lay the foundation for a compelling subscription service that carries recurring high-margin revenue. Once that happens, investors will be more able to see how Apple Inc. (NASDAQ:AAPL)’s per share profits, which are slated to rise from $44 in the fiscal year just ended to $58 a share by fiscal 2014, could move to $75 a share by later in the decade.

And it’s the bottom line that will likely have investors pushing this stock back up above $700 a share (representing 40% upside) in coming years.

To get a sense of Apple Inc. (NASDAQ:AAPL)’s latent value, you need only look at the company’s balance sheet. 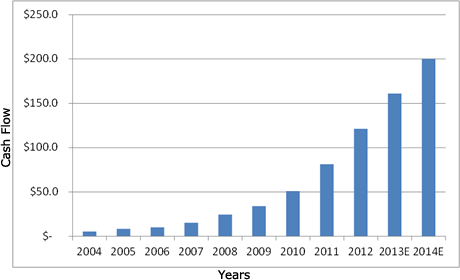 To put that in perspective, the recent pullback in Apple’s stock means projected 2015 cash will be more than half of the current value. If you back out the $200 billion Apple will likely have on its books by fiscal 2014, then Apple Inc. (NASDAQ:AAPL) is now valued at around $280 billion. That’s just 5.5 times trailing operating cash flow. It’s hard to overstate just how cheap this stock has become, in relation to cash and cash flow.

Risks to Consider: Much rides on Apple’s imminent push into the TV business. The efforts are likely to represent the culmination of all that Apple has been working toward, and the company can’t afford to bungle the launch.

Action to Take –> Apple’s management has never gone to much trouble when it comes to enlightening investors about the company’s growth prospects. The meteoric sales growth has made that unnecessary. But we’re entering a new era for Apple, as hardware sales growth inevitably slows, but rising software sales pick up the slack. As a result, management will need to step out of its comfort zone and start talking up future growth plans.