Investing in the Future of Television and Entertainment: Intel Corporation (INTC) and More

Television has become an integral part of the average person’s life. Some people wouldn’t be able to survive without it. It was once the primary source of entertainment for many, but then came the internet. The  television and entertainment landscape has been irreversibly changed, and it is continuing to do so. Here are some of the key players attempting to shake up the way we watch television:

Intel has apparently confirmed that it will indeed be working on an Internet TV service and set-top box, and according to Erik Huggers, the corporate vice president at Intel Media, the company has also been collaborating with the likes of Apple Inc. (NASDAQ:AAPL), Google Inc (NASDAQ:GOOG), and Netflix, Inc. (NASDAQ:NFLX) to create its TV platform as well. Huggers elaborated by stating that: “We’re shooting for a service that incorporates literally everything… But Rome wasn’t built in a day. It’ll take time.”

A blend of internet and television only makes sense, and many TV sets can already be found with apps such as Netflix installed out of the box. Intel will most likely offer bundled programming like a traditional cable provider. Whether this is a good idea for Intel, or a “diworsification” is yet to be known, as the company is moving away from sole reliance on its traditional business and into new waters.

Youtube (owned by Google) also plans to offer a new television app. The app will be launched on Freesat (a joint-venture between UK broadcasters ITV and the BBC), who provides a free-to-air satellite TV service. Youtube has an estimated $800 million viewers a month, and is already available on Apple’s set-top box as well. Youtube, however, seems to be shifting more towards a full-blown, more “television-like,” service offering. Youtube may even launch a paid subscription model for a selection of channels on its video-sharing network soon.

Although Apple already offers consumers a set-top box, it has been rumored that Apple may build a “smart” television in the near future as well. New rumors and hype have also surfaced, after the company recently hired an OLED expert from LG, James (Jueng-jil) Lee. An “iTV” with a premium price tag, if successful, could give Apple a new source of growth and revenue to add to its lineup of phones and tablets. Especially if the TV syncs with Apple’s already outstanding ecosystem that includes the iTunes store for not only music, but digital movies as well. The demand for the TV is apparently there as well, although the source for this graph may be a little biased: 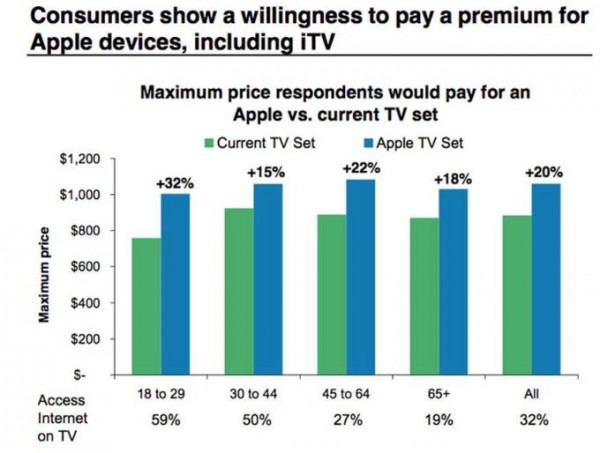 Don’t count out “Mr. Softie.” Many don’t think of the company this way, but Microsoft has all the pieces to create an ecosystem that is not only enviable, but also hard to replicate. All they need is the glue to paste all of their miscellaneous components together. The company is expanding its cloud services and shifting into mobile, linking things such as their Office products with SkyDrive and their Windows Phones. The Xbox is being cemented in the mix as well. The Xbox store is becoming more and more like the iTunes store and the Xbox is evolving into more of a set-top, all-in-one entertainment system for games, media, movies, and television.

Hewlett-Packard Company (HPQ) May Be Exacting Revenge on Dell Inc. (DELL) and...

Dow Fights to End Day in the Green: The Procter & Gamble Company (PG)...

These Companies Can Unlock Their Potential Value: Dell Inc. (DELL) and More