International Business Machines Corp. (IBM): Is it Time to Buy?

Shares of International Business Machines Corp. (NYSE:IBM) recently took a tumble, after the New York-based company reported earnings that missed analyst expectations on both its top and bottom lines. International Business Machines Corp. (NYSE:IBM), which has evolved from the personal computing giant that it was several decades ago into a streamlined software and services company, is widely considered a bellwether of the tech industry. Should investors fret over the company’s first quarter fumble, or is the stock’s post-earnings dip a good buying opportunity for value investors?

For its first quarter, International Business Machines Corp. (NYSE:IBM) earned $2.70 per share, or $3.07 billion, slightly up from the $2.61 per share, or $3.03 billion, it reported in the prior year quarter. Analysts polled by Thomson Reuters had expected the company to earn $3.05 per share.

International Business Machines Corp. (NYSE:IBM) attributed its disappointing decline in top and bottom line growth to fewer software and mainframe transactions, as well as a weaker Japanese yen. International Business Machines Corp. (NYSE:IBM)generates approximately 10% of its revenue from Japan, where the yen has declined 18% during the quarter, due to the country’s aggressive monetary easing measures.

Shifts in technology, especially the growing popularity of IT as a service (ITaaS), have changed the way International Business Machines Corp. (NYSE:IBM) must approach its core business. ITaaS treats IT services as a commodity, and provides companies with a fixed amount of software, hardware and support services catered to a business’ individual needs, for a set monthly fee. This shift has decreased IT expenses for many companies, which now opt to hire ITaaS companies such as EMC Corporation (NYSE:EMC) to oversee their IT needs.

Meanwhile, sales of IBM’s middleware software products, which are used to connect two unrelated applications (such as database systems to web servers), grew 1.0% year-over-year to $3.5 billion. These applications include products such as WebSphere, Tivoli, social workforce solutions and Rational products. However, operating system sales slid 2.0% to $578.0 million.

IBM attributed these declines and anemic gains to economic uncertainties that kept certain software deals, worth roughly $400 million, from closing during the first quarter. However, its order backlog rose 1.0% year-over-year to $141.0 billion, which included 22 new service agreements worth $100.0 million. Therefore, although IBM’s first quarter numbers weren’t too strong, its order backlog suggests that the rest of the year will be more favorable.

Hardware revenues, which include its servers and storage business, plunged 17.2% to $3.11 billion. IBM attributed the slide to product transitions and execution problems. Financing revenue, which comes from interest earned off financing plans for its IT services and products, rose 1.8% to $499.0 million.

Although IBM’s physical x86 servers account for a relatively small part of its business (16.7% of 2012 revenue), the company still surprised Wall Street when it announced that it was in discussions to sell the struggling business to Chinese tech giant Lenovo, the second largest personal computer company in the world after Hewlett-Packard Company (NYSE:HPQ). According to unnamed sources close to the deal, IBM wants $5 billion to $6 billion for the server business unit.

Most of Lenovo’s current success can be attributed to IBM, which sold its personal computer business to the Beijing, China-based company for $1.25 billion back in 2005. Adding physical servers to its product line would make it a serious threat in the enterprise world to Hewlett-Packard Company (NYSE:HPQ). Lenovo has increasingly gained ground against HP in the personal computers business over the past few years with its ThinkPad products.

Shedding its server business would make sense for IBM, since the division has posted annual declines in revenue ever since 2008, which offset gains from its higher-margin IT software and services segments. Considering that IBM’s sale of its personal computer segment to Lenovo came right before the PC industry crashed, I think investors should trust IBM’s decision.

IBM investors should simply look at Hewlett-Packard’s current dire state to see where Big Blue would have ended up if it hadn’t shed its personal computers business. 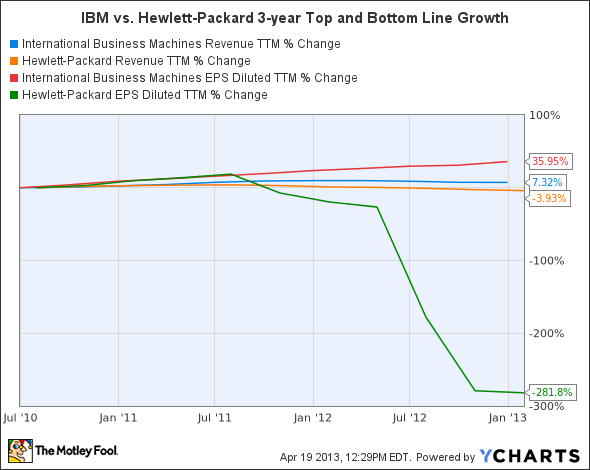 Of course, HP was also weighed down by leadership changes and terrible acquisitions such as EDS, Palm and Autonomy. Meanwhile, IBM made focused decisions toward longer-term goals, and shifted with the changing tides of technology while HP simply got swept away. For the full year, IBM expects to earn $16.70 per share, a 9.5% gain from the previous year, and in line with analyst estimates.

IBM’s decline in emerging markets, such as the BRIC (Brazil, Russia, India, China) markets was particularly disappointing. The company’s average revenue from BRIC markets slid 1.0% during the quarter. 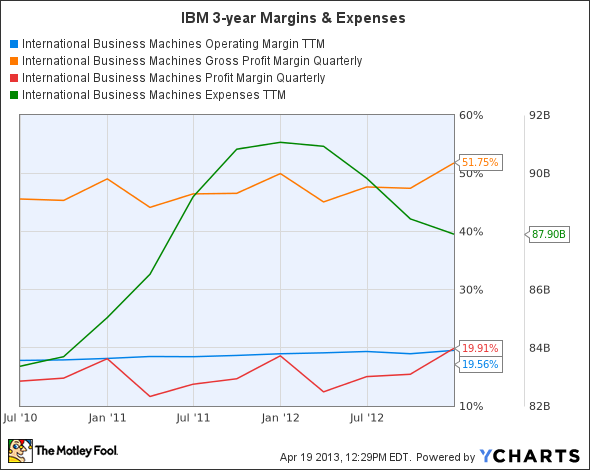 From this chart, we can see that the quarter’s results are a continuation of a longer-term trend of rising margins and declining expenses. This contributed to the company’s strong cash position of $11.99 billion at the end of the quarter, up from $11.33 billion a year ago. However, free cash flow from operations declined slightly from $1.87 billion to $1.70 billion.

Fundamentally, IBM is still one of the strongest names in IT software and services.

IBM has the strongest margins of these three companies, simply because it sells much less lower-margin hardware than its peers. The company also trades with a low P/E for a big blue chip tech company, especially when compared to the industry average of 14.75.

Investors obviously should steer clear of Hewlett-Packard’s sinking ship, which is now being dragged under by mediocre Windows 8 sales and soaring demand for tablets. Lenovo, which trades on the pink sheets, is a viable higher growth alternative to HP, and offers several popular Android tablets.

Despite these strengths, IBM’s biggest threat is the global economy. If Europe continues to struggle and China slows down further, then IBM could experience very little growth in 2013. However, IBM is a safe low-beta stock that will likely rise again once these problems finally end.

The article Is it Time to Buy IBM? originally appeared on Fool.com and is written by Leo Sun.