Some clarity on the Syria situation is pushing oil and gold down today, while the Dow Jones Industrial Average is surging. There was another data problem at Nasdaq today, though this one was short-lived, lasting for only 10 minutes and only affecting stocks with symbols between PC and SPZ, according to CNBC. As of 1:25 p.m. EDT the Dow is up 120 points to 13,954. The S&P 500 is up 0.95% to 1,655.

A vote on U.S. intervention in Syria is expected today by the Senate Foreign Relations Committee. The resolution would authorize the U.S. to use military force against Syria for 60 days with a possible 30-day extension, but it would prohibit the use of ground forces. There are separate drafts of the resolution, some more restrictive than others, and while it looks likely to pass, it is unclear which version will pass.

In any event, oil prices and gold are down as the uncertainty over U.S. military action passes. Falling oil prices are positive for the U.S. economy. There was one U.S. economic release today.

The Department of Commerce reported that the trade deficit rose in July by $4.6 billion to a seasonally adjusted $39.1 billion, in line with analyst expectations and the 12-month average. 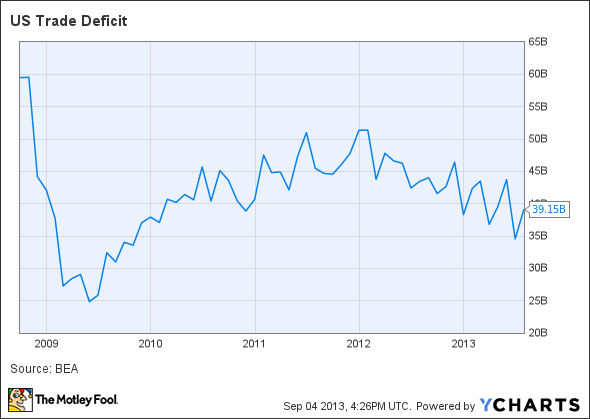 US Trade Deficit data by YCharts.

Today’s Dow leader is Intel Corporation (NASDAQ:INTC), up 2.7% after it unveiled its new Atom processors, which are based on its Silvermont architecture and aimed at the low-power microserver and data-center markets. Intel Corporation (NASDAQ:INTC) has been struggling to compete with ARM‘s and Qualcomm‘s low-power chips, which have gained footholds in the smartphone and tablet markets.

The article Today’s Movers and Shakers on the Dow originally appeared on Fool.com and is written by Dan Dzombak.

Dan Dzombak can be found on Twitter @DanDzombak or on his Facebook page, DanDzombak. He has no position in any stocks mentioned. The Motley Fool recommends Intel. The Motley Fool owns shares of Intel and Microsoft.