Companies 0 See All
Hedge Funds 0 See All
Insiders 0 See All
Institutional Investors 0 See All
Click here to see all results for Sorry, no results has been found matching your query.
IPOs-News-Stock Analysis-Tech

Share Tweet Email
<< Previous
Page 2 of 6
Next >>
See All
It is no secret that my initial valuation of Uber Technologies Inc (NYSE: UBER) used far too cramped a definition of its total market, and Bill Gurley rightly pointed to the potential that these companies have to expand markets, but defining the market as broadly as these companies makes a mockery of the concept. In fact, I will draw on a 3P test that I developed in the context of converting stories to numbers, to put these TAM claims to the test; 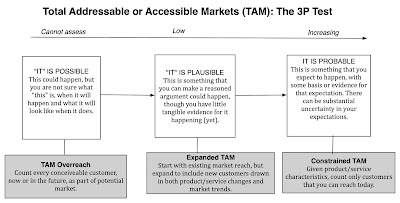 With Uber, for instance, my initial estimate of the car service market in June 2014, while defining the magnitude of the car services market then, was a constrained TAM and, in hindsight, it proved far too limited, as Uber’s pricing and convenience drew new customers into the market, expanding the market significantly. It is a lesson that I have taken to heart, and I do try to give disruptive companies the benefit of the down in estimating TAM, erring more towards the expanded TAM definition. That said, the total market claims that I see outlined in the prospectuses of the companies that have gone public this year, while perhaps meeting the possible test, fail the plausible and probable tests. That TAM overreach makes the cases for these companies weaker, rather than stronger, by making them less credible.
2. All about Scaling (in dollars and units)
All of the companies that have gone, or are planning to go, public this year are telling scaling up stories, with explosive growth in revenues and talk of acceleration in that growth. On this count, the companies are entitled to crow, since they have grown revenues at unprecedented rates coming into their public offerings.

In short periods, these companies have grown from nothing to becoming among the largest players in their markets, at least in terms of revenues. While this focus on revenue growth is not surprising, since it is at the heart of their stories, it is revealing that all of the companies spend as much, if not, more time talking about growth in their revenue units (Uber riders, WeWork members and Peloton subscribers).

In fact, each of these companies, in addition to providing user/subscriber members, also provide other eye-popping numbers on relevant units, Uber on drivers and rides taken, WeWork on cities and locations and Peloton on bikes sold. I understand the allure of user numbers, since the platform that they inhabit can be used to generate more revenues. That is implicitly the message that all these companies are sending, and I did estimate a lifetime value of an Uber rider at close to $500 and I could use the model (described in this paper) to derive values for a WeWork member or a Peloton subscriber. After all, the most successful user-based companies, such as Facebook and Amazon Prime, have shown how having a large user base can provide a foundation for new products and profits. However, there are companies that focus just on adding users, using badly constructed business models and pricing products/services much too cheaply, hoping to raise prices once the users are acquired. MoviePass is an extreme example of user pursuit gone berserk, but it had no trouble attracting venture capital money, and I fear that there are far more young user-based companies following the MoviePass script than the Facebook one.
Share Tweet Email
<< Previous
Page 2 of 6
Next >>
See All