How Will OfficeMax Incorporated (OMX) Compete With The Big Boys?

OfficeMax Incorporated (NYSE:OMX) is one of the largest distributors of office products in the world, with almost 1,000 superstores.  However, the company’s revenues have been declining for some time now (see below) and as a result, shares have performed poorly.  This company that traded for over $55 per share just over five years ago is now just over $10.  Will the downtrend continue?  Should investors who have held strong continue to do so?  With the company set to report 2012’s results on Thursday the 21st, maybe we’ll get some insight into the direction of this retailer. 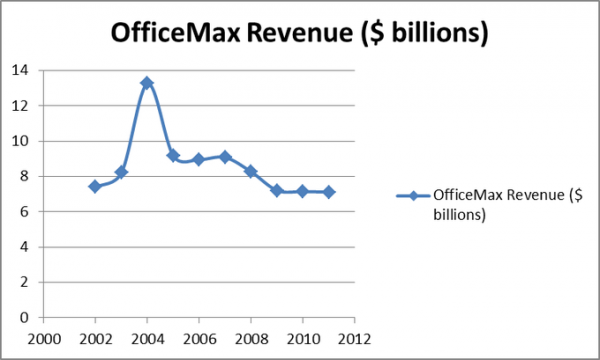 OfficeMax is a leading supplier of office supplies, paper, printing services, technology products, and office furniture.  They operate stores in the United States, Canada, Australia and New Zealand, and also in Mexico through a joint venture.  The company’s stores offer name-brand as well as Office Max brand merchandise and they do a significant amount of their business via their website.

My main concern with OfficeMax is what they are up against.  First off, everyone from government agencies to private companies to self-employed individuals are allocating less money toward office supplies in the uncertain economic environment.  When you combine this with the company’s decreased profit margins as a result of trying to price-match their competition, and it’s no wonder the company has struggled.

OfficeMax’s only direct peers are Office Depot Inc (NYSE:ODP) and Staples, Inc. (NASDAQ:SPLS) and I think that of the three, Staples is the most attractive (more about this in the valuation section below).  The real problem, however, is the competition from discount superstores such as Wal-Mart Stores, Inc. (NYSE:WMT) and online powerhouses like Amazon.com, Inc. (NASDAQ:AMZN).

First, let’s start with the physical discount stores like Wal-Mart.  Due to the general size of their company and the extremely efficient distribution network, Wal-Mart offers the lowest prices of pretty much any physical retail store.  Wal-Mart and similar stores offer similar products to OfficeMax, and usually at slightly lower prices.  In addition, customers can do their other shopping at the same time, which they can’t do at OfficeMax.

Personally, my only motivation for going to OfficeMax is that it is generally a more pleasant, hassle-free shopping experience, where Wal-Mart can be hectic and stressful.  However, if you are shopping on a budget, you simply can’t beat it at an actual store.  Wal-Mart is a play on people looking for deals, and it works in any economy.

The real problem for any physical retailer is online discounters, especially one as large as Amazon.com.  The problem Amazon poses for retailers is that not only can they buy in bulk and ship efficiently; they don’t have the costs associated with having a physical store to staff and maintain.  While writing, just to do a quick comparison, I opened both websites to see who had the better deals.  Let’s say that I need some ink for my printer, and on officemax.com, I see that the extra-large black cartridge is $22.99.  A quick search on Amazon shows that the same item is $21.60, and Amazon has free shipping.  If I am in charge of buying supplies on a budget for my company, which one am I going to pick?

Although there are many challenges to OfficeMax’s business model, there may be bright days ahead.  With the improving economy, businesses and the government are projected to loosen up on office supply spending.  When the company reports next week, they are expected to have earned 75 cents per share in 2012, meaning that they currently trade for 14.2 times earnings, which are projected to rise to $0.83 and $0.93 in 2013 and 2014 respectively.  This means that the consensus is calling for forward earnings growth of 11.7% which certainly justifies the valuation.

Apple Inc. (AAPL): Are Its Glory Days Finally Over?

How to Spot the Next Multi-Bagger; 5 Traits of Great Growth Stocks: Amazon....