Acura, the luxury vehicle division of Japanese automaker Honda Motor Co Ltd (ADR) (NYSE:HMC), has just tweeted the first teaser picture of an NSX second generation prototype. This new NSX is a hybrid-electric supercar and a revival of the first generation Acura NSX. Acura is planning on putting out the NSX to the market in 2015.

The first NSX redefined the sports car world and this car will hopefully do the same, with new technologies that will cascade down to other models in the Acura line.

Honda Motor Co Ltd (ADR) (NYSE:HMC) has a good foundation to build upon from the success of the first generation NSX, and is currently overhauling the luxury Acura brand. Acura sales in the United States were up an encouraging 14% in the first four months of 2013.  But Acura is “only” ranked fifth in the United States among luxury brands, behind BMW, Toyota’s Lexus brand, Mercedes-Benz, and General Motors’ Cadillac. And although the Acura team is most likely not planning on directly competing with Porsche and Ferrari, the more affordable NSX supercar will appeal to more consumers and give Honda a new front to compete with the likes of Nissan, Audi, and Porsche.

Honda shares have done fairly well in the past few months due to a weaker Japanese yen and a robustly strong automotive market: 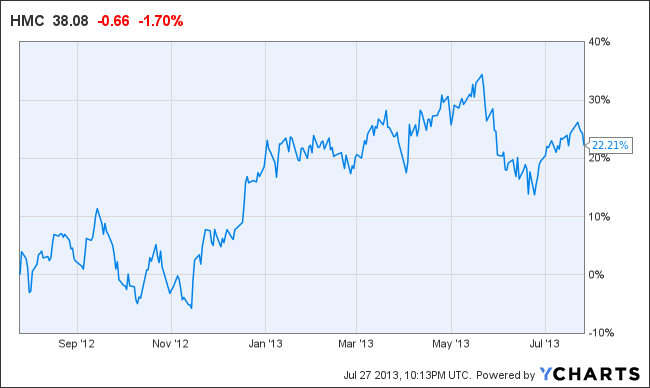 Sure, an NSX supercar will probably not be the first model a budget-conscious family or consumer. Analysts estimate the NSX will cost somewhere in the $120,000-$200,000 range to compete with Audi’s R8. The Nissan GT-R, a comparable model to the NSX, runs at about $110,000. Porsches are priced expensively since they are very high-end, high quality sports cars. So, the NSX might have some difficulty competing with Nissan if its price is much above $120,000. And, people with a lot of discretionary income to spend on a high priced car aren’t offered much of a reason to not buy a snazzy Porsche and get an NSX instead.

But, as we will see in in the next point, the NSX itself might not be the biggest piece to Honda Motor Co Ltd (ADR) (NYSE:HMC)’s puzzle. Acura’s NSX will possibly not only take some market share away from Nissan, Audi, and Porsche, but will also give Honda leverage in selling its other brands. The NSX would probably ride the coattails of the electric car revolution and have a larger impact than its numbers might originally suggest.