Himax Technologies, Inc. (ADR) (HIMX): Have You Ever Heard of This $3 Stock? If not, Then You’re Missing Great Returns

I’m not too sure whether many analysts, investors or bloggers are aware that a company known as Himax Technologies, Inc. (ADR) (NASDAQ:HIMX) even exists, even though its products are embedded within devices that make us feel that we live in the 21st century. As a maker of display drivers for monitors, notebooks, TVs, tablets, smartphones, cameras and what not, there are high chances that Himax has touched our lives in some way or the other.

Despite this, it seems that the stock doesn’t garner much interest on the Street, as evidenced by an average 3-month volume of around half a million and coverage by just three analysts. But those who are ignoring Himax as an investment are losing out on solid returns.

When I had covered Himax for the first and the last time a year ago, there were solid indications that the stock could deliver great returns. It has vindicated my views by appreciating close to 90% since then and also pays one solid annual dividend depending on the profit earned in the previous year. What’s more, even after such a terrific rise, it trades at a trailing P/E of just 9.6 times and has a very impressive PEG ratio of 0.53.

As you can see below, Himax’s revenue and earnings have risen consistently over the past couple of years. Analysts expect earnings to rise further as a forward P/E of just 7 times would have us believe. Moreover, Bank of America Corp (NYSE:BAC) reaffirmed its “Buy” rating on Himax shares and even raised its price target after the company posted a solid fourth-quarter. 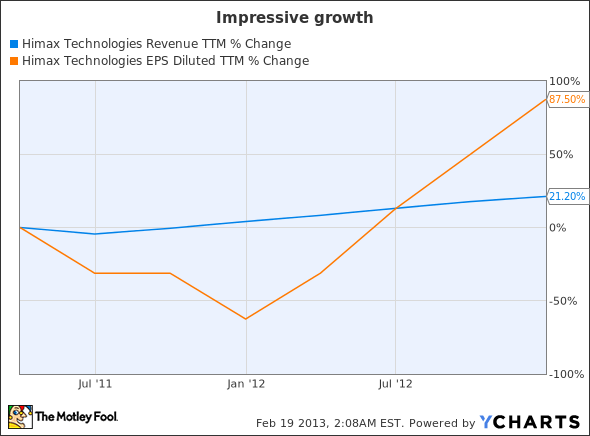 Clearly, there’s still opportunity for potential investors to jump onto Himax as it still has a lot of fuel to fly higher. The primary reason why one should consider buying Himax, apart from its cheap valuation, is its strong clientele. Its presence in a wide range of consumer devices associates it with well-known brands such as Samsung, Apple Inc. (NASDAQ:AAPL), Dell Inc. (NASDAQ:DELL), LG Display Co Ltd. (ADR) (NYSE:LPL), AOC and many more in some way or the other.

Himax supplies its drivers to Wintek, which is famous for manufacturing touch panels for the iPhone and the iPad. Apple’s defection to in-cell touch display technology proved to be a headache for Wintek, and Apple as well as they resulted in production constraints. However, Wintek is still a supplier for the iPad and it received a massive boost before the launch of the iPad mini. Going forward, it seems Wintek is readying touchscreens for the next iPad and this is good news for Himax.

Moreover, the iPad is now growing at a faster rate than the iPhone and Himax, with its Wintek partnership, seems well-positioned to ride this growth. But Himax’s prospects aren’t limited to just Apple. The company supplies drivers and power solutions to television display panel makers such as Samsung, LG, Innolux etc.

In addition, increasing sales of smartphones in China are proving to be tailwinds for Himax’s business and its margins. The company’s small and medium-sized display drivers, which are used in smartphones, tablets and automotive displays, jumped 50% from last year and now constitute around 45% of its total revenue.