Hewlett-Packard Company (HPQ): Why It Is a Good Long-Term Investment in Innovation

It’s time to check up on the progress that

Hewlett-Packard Company (NYSE:HPQ) is making. The turnaround really is a long-term investment, and if you have a five-plus year horizon, this stock might be worth taking a look at. The only way HP can expect a turnaround is if it manages to come up with new innovative products.
Although net income has tanked of late, HP’s free cash flow generation remains strong. 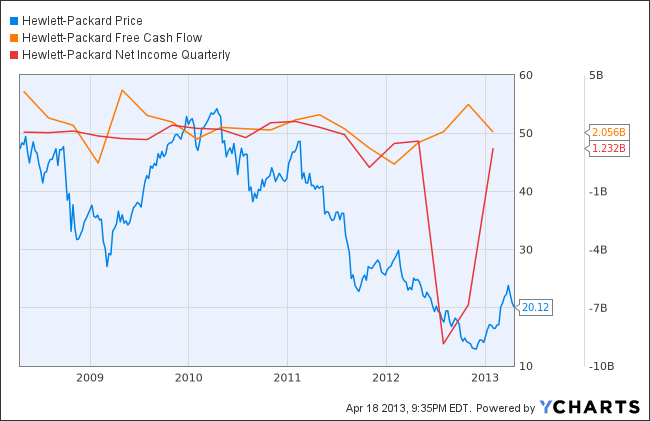 Hewlett-Packard Company (NYSE:HPQ) generated some $10.3 billion in free cash flow over the last 12 months compared to less than $1 billion that it paid out in dividends.
The real drag for the company has been its printing and personal-systems group, which provides commercial PCs, consumer PCs and various handheld computing devices. This segment managed to account for some 77% of revenue in 2012.

Meanwhile, its enterprise storage and servers segment services both enterprise and small businesses, and generates some 17% of revenue.
Hewlett-Packard Company (NYSE:HPQ) is the largest player in the personal computing market with 16.5% market share, while also holding a leading position in the server segment with 32% market share. As PC headwinds continue, the server business will become a larger part of the company.
PC headwinds are continuing. According to Gartner, first quarter worldwide PC unit shipments declined 11% year-over-year. Hewlett-Packard Company (NYSE:HPQ)’s 1Q PC unit shipments are forecast to have been down 24% year-over-year, but the company remained one of the leaders in PC market share, with HP and Lenovo having just under 15% market share each.
The recovery in HP’s end markets will likely continue to be strained, at least over the interim. However, its major growth opportunities include the cloud computing space and the development of new products to help it penetrate the tablet space.
I’m encouraged by HP’s transition and initiatives, including its business process outsourcing solution and a customized mobile application for the U.S. Department of Housing and Urban Development. These are key steps in the transition from the PC market to other high-margin businesses.

Going in to 2013, there were a total of 47 hedge funds long the stock, with Pzena Investment Management having the largest position in the company, worth close to $586 million and comprising 4.8% of its total 13F portfolio. At number two was Relational Investors with Hewlett-Packard Company (NYSE:HPQ) making up 9.4% of its 13F portfolio.

Dell Inc. (NASDAQ:DELL) is another major global IT and PC company. It is making serious efforts to restructure its business as nearly 70% of its business is linked to the PC market. The PC market has been impacted by weak macro-economic concerns and tablet cannibalization. What’s more is that revenue from Dell Inc. (NASDAQ:DELL)’s consumer business declined by 24% year-over-year last quarter, a substantial fall compared to its other segments.
Share Tweet Email
Page 1 of 2
Next >>
See All

Microsoft Corporation (MSFT): Two Key Indicators You May Have Overlooked