Not too long ago, Dell Inc. (NASDAQ:DELL) was teasing rival Hewlett-Packard Company (NYSE:HPQ)‘s  about its woes. Back in 2011 when HP was suffering from a major identity crisis, Michael Dell took to tweeting some zingers at the expense of his company’s larger competitor. HP’s contemplation of ditching the PC business was an opportunity for Dell to capitalize.

The tables have turned
With news today that Dell is officially hoping to go private in a $24.4 billion deal with Michael Dell and Silver Lake Partners that values the company at $13.65 per share, HP is now taking the opportunity to tease Dell. This comes after reports emerged last month that Dell was exploring the option.

HP has now issued a formal statement, the sole purpose of which is to goad its soon-to-be private rival:

Dell has a very tough road ahead. The company faces an extended period of uncertainty and transition that will not be good for its customers. And with a significant debt load, Dell’s ability to invest in new products and services will be extremely limited. Leveraged buyouts tend to leave existing customers and innovation at the curb. We believe Dell’s customers will now be eager to explore alternatives, and HP plans to take full advantage of that opportunity.

Them be fightin’ words!

Let’s take this outside
Not only is HP calling out Dell for the leveraged nature of the deal, saying that Dell won’t be able to invest in its future, but also makes it very clear that it intends to win over its customer base. The two PC giants continue to duke it out amid stagnation in the broader market. IDC’s recent estimates show that the two are closer competitors domestically, while HP still has an advantage internationally and retains its No. 1 spot.

At the same time, it’s not as if HP doesn’t have a hefty debt burden of its own — $21.8 billion in long-term debt at last count. The company raised $4.6 billion of debt as recently as September 2011 to help finance its purchase of Autonomy, which promptly evaporated just over a year later along with an additional $4.2 billion for a total impairment of $8.8 billion related to the scandalous acquisition.

Charge it
Less than three months ago, ratings agency Moody’s Corporation (NYSE:MCO) downgraded its long-term credit rating (following a similar move by Fitch) on HP’s senior unsecured paper to Baa1 along with a negative outlook over concerns that its core businesses will have “slow to no growth prospects over the coming years.” Free cash flow was expected to take a hit due to restructuring-related cash outflows.

On top of that, HP has several hefty debt maturities on the horizon this year.

That’s $5.45 billion that HP is on the hook for over the next seven months. When you add in its capital lease obligations, that figure climbs to $5.7 billion. At the end of October, HP was sitting on $11.3 billion in cash and equivalents, so these debt payments could put a dent in its coffers. More than likely, though, HP will refinance a good portion of this paper, so it won’t be as painful as investors might expect.

Still, HP’s debt load has steadily climbed over the years and its debt-to-equity ratio is the highest it’s ever been. 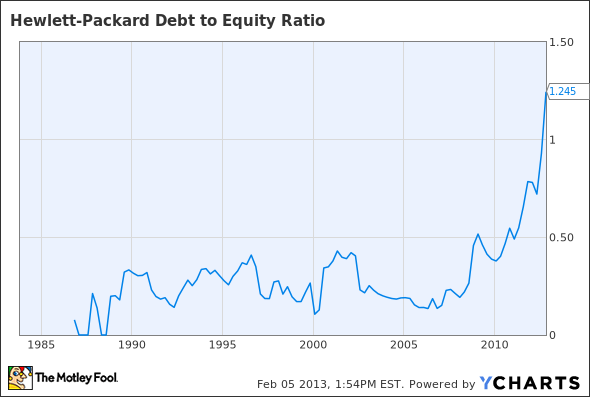 I’m not so sure that HP is in a position to tease rivals about their financial positions. OK, let’s be frank: it’s not.

The article HP Teases Dell About Its New Private Life originally appeared on Fool.com and is written by Evan Niu, CFA.