Is Pampa Energia S.A. (ADR) (NYSE:PAM) the right investment to pursue these days? Prominent investors are getting less bullish. The number of bullish hedge fund bets contracted by1 in recent months. PAMwas in 17 hedge funds’ portfolios at the end of September. There were 18 hedge funds in our database with PAM positions at the end of the previous quarter. At the end of this article we will also compare PAM to other stocks including FS Investment Corporation (NYSE:FSIC), Paylocity Holding Corp (NASDAQ:PCTY), and First Majestic Silver Corp (NYSE:AG) to get a better sense of its popularity.

With all of this in mind, we’re going to go over the latest action encompassing Pampa Energia S.A. (ADR) (NYSE:PAM).

What have hedge funds been doing with Pampa Energia S.A. (ADR) (NYSE:PAM)?

At the end of the third quarter, a total of 17 of the hedge funds tracked by Insider Monkey were long this stock, a change of -6% from the second quarter of 2016. By comparison, 11 hedge funds held shares or bullish call options in PAM heading into this year. With hedgies’ capital changing hands, there exists a few key hedge fund managers who were boosting their holdings considerably (or already accumulated large positions). 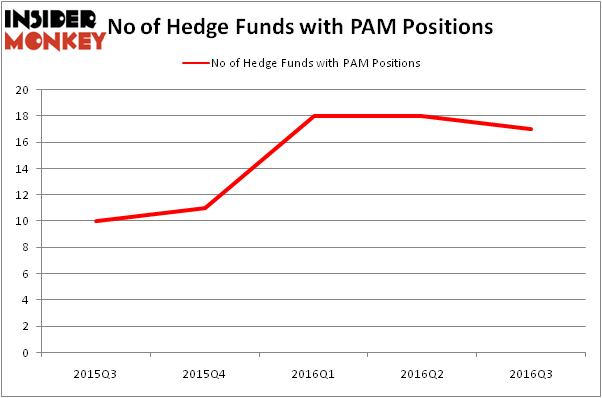 When looking at the institutional investors followed by Insider Monkey, Point State Capital, led by Zach Schreiber, holds the number one position in Pampa Energia S.A. (ADR) (NYSE:PAM). Point State Capital has a $143.4 million position in the stock, comprising 1.5% of its 13F portfolio. On Point State Capital’s heels is Daniel S. Och of OZ Management, with a $28.7 million position; the fund has 0.2% of its 13F portfolio invested in the stock. Some other peers that hold long positions comprise Jody LaNasa’s Serengeti Asset Management, Kevin D. Eng’s Columbus Hill Capital Management and Richard Driehaus’s Driehaus Capital. We should note that Columbus Hill Capital Management is among our list of the 100 best performing hedge funds which is based on the performance of their 13F long positions in non-microcap stocks.