We know that hedge funds generate strong risk-adjusted returns over the long run, therefore imitating the picks that they are collectively bullish on can be a profitable strategy for retail investors. With billions of dollars in assets, smart money investors have to conduct complex analyses, spend many resources and use tools that are not always available for the general crowd. This doesn’t mean that they don’t have occasional colossal losses; they do (like Ackman’s recent Valeant losses). However, it is still good idea to keep an eye on hedge fund activity. With this in mind, as the current round of 13F filings has just ended, let’s examine the smart money sentiment towards Alliant Energy Corporation (NYSE:LNT).

Is Alliant Energy Corporation (NYSE:LNT) a healthy stock for your portfolio? It looks like hedge funds are in a slightly bearish mood. Among the funds in our database, the number of investors bullish on the company inched down by one to 15 during the third quarter. The level and the change in hedge fund popularity aren’t the only variables you need to analyze to decipher hedge funds’ perspectives. A stock may witness a boost in popularity but it may still be less popular than similarly priced stocks. That’s why at the end of this article we will examine companies such as Lear Corporation (NYSE:LEA), Total System Services, Inc. (NYSE:TSS), and Newfield Exploration Co. (NYSE:NFX) to gather more data points.

Heading into the fourth quarter of 2016, a total of 15 of the hedge funds tracked by Insider Monkey were long this stock, down by 6% from the second quarter of 2016. The graph below displays the number of hedge funds with bullish position in LNT over the last five quarters. With the smart money’s capital changing hands, there exists a select group of notable hedge fund managers who were boosting their stakes substantially (or already accumulated large positions). 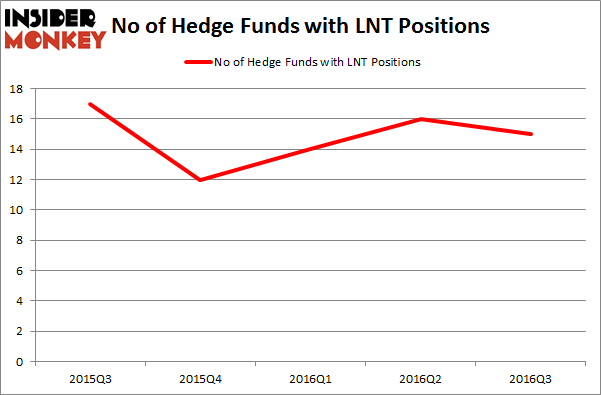 According to publicly available hedge fund and institutional investor holdings data compiled by Insider Monkey, Cliff Asness’ AQR Capital Management has the most valuable position in Alliant Energy Corporation (NYSE:LNT), worth close to $24.7 million, accounting for less than 0.1%% of its total 13F portfolio. The second most bullish fund manager is Balyasny Asset Management, led by Dmitry Balyasny, which holds a $17.4 million position; the fund has 0.1% of its 13F portfolio invested in the stock. Remaining members of the smart money that are bullish include Phill Gross and Robert Atchinson’s Adage Capital Management, Peter Muller’s PDT Partners, and D E Shaw, one of the biggest hedge funds in the world. We should note that none of these hedge funds are among our list of the 100 best performing hedge funds which is based on the performance of their 13F long positions in non-microcap stocks.

Since Alliant Energy Corporation (NYSE:LNT) has encountered declining sentiment from the aggregate hedge fund industry, it’s easy to see that there exists a select few fund managers that elected to cut their entire stakes heading into Q4. Interestingly, Jos Shaver’s Electron Capital Partners dropped the biggest position of all the hedgies watched by Insider Monkey, comprising close to $6.5 million in stock. Jacob Gottlieb’s fund, Visium Asset Management, also said goodbye to its stock, about $3.5 million worth.

As you can see these stocks had an average of 38 funds with bullish positions and the average amount invested in these stocks was $1.16 billion. That figure was just $73 million in LNT’s case. Newfield Exploration Co. (NYSE:NFX) is the most popular stock in this table. On the other hand Lear Corporation (NYSE:LEA) is the least popular one with only 32 bullish hedge fund positions. Compared to these stocks Alliant Energy Corporation (NYSE:LNT) is considerably less popular than LEA. Considering that hedge funds aren’t fond of this stock in relation to other companies analyzed in this article, it may be a good idea to analyze it in detail and understand why the smart money isn’t behind this stock. This isn’t necessarily bad news. Although it is possible that hedge funds may think the stock is overpriced and view the stock as a short candidate, they may not be very familiar with the bullish thesis. In either case more research is warranted.