We have been waiting for this for a year and finally the third quarter ended up showing a nice bump in the performance of small-cap stocks. Both the S&P 500 and Russell 2000 were up since the end of the second quarter, but small-cap stocks outperformed the large-cap stocks by double digits. This is important for hedge funds, which are big supporters of small-cap stocks, because their investors started pulling some of their capital out due to poor recent performance. It is very likely that equity hedge funds will deliver better risk adjusted returns in the second half of this year. In this article we are going to look at how this recent market trend affected the sentiment of hedge funds towards Whiting Petroleum Corp (NYSE:WLL), and what that likely means for the prospects of the company and its stock.

Whiting Petroleum Corp (NYSE:WLL) investors should be aware of a decrease in activity from the world’s largest hedge funds of late. The level and the change in hedge fund popularity aren’t the only variables you need to analyze to decipher hedge funds’ perspectives. A stock may witness a boost in popularity but it may still be less popular than similarly priced stocks. That’s why at the end of this article we will examine companies such as Generac Holdings Inc. (NYSE:GNRC), PBF Energy Inc (NYSE:PBF), and Select Income REIT (NYSE:SIR) to gather more data points.

With all of this in mind, let’s take a peek at the recent action surrounding Whiting Petroleum Corp (NYSE:WLL).

At the end of the third quarter, a total of 35 of the hedge funds tracked by Insider Monkey held long positions in this stock, a change of -15% from one quarter earlier. With the smart money’s positions undergoing their usual ebb and flow, there exists an “upper tier” of noteworthy hedge fund managers who were boosting their holdings substantially (or already accumulated large positions). 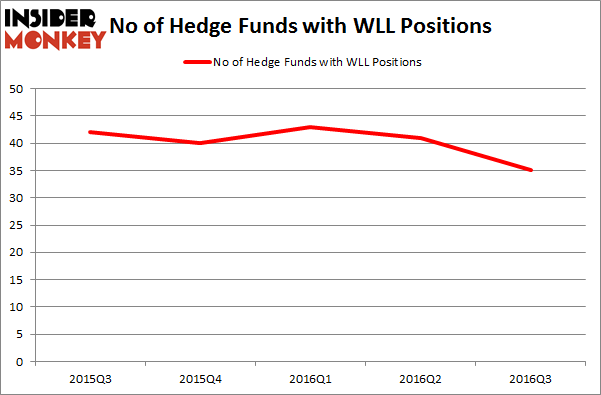 Have Hedge Funds Found A Winner In New Relic Inc (NEWR)?
Monthly Newsletter Strategy
Download a free copy of our newsletter and see the details inside!
Hedge Fund Resource Center
Related News
This Hedge Fund Just Made A Massive Bet Against the SPY Here’s Why These Five Stocks Are in the Spotlight Why Goldman Sachs, Whiting, Nike, and More Are Making Headlines This Week in Energy: Seadrill Ltd, Whiting Petroleum, and More Five Cheap Energy Stocks Poised to Explode A Closer Look at Five Stocks on the Move on Monday Here’s Why These Five Stocks Are on the Move 10 Best Youtube Children’s Songs 15 Worst Times and Places To Take A Selfie 10 Second Job Ideas for Full-Time Workers
Billionaire Hedge Funds