It is already common knowledge that individual investors do not usually have the necessary resources and abilities to properly research an investment opportunity. As a result, most investors pick their illusory “winners” by making a superficial analysis and research that leads to poor performance on aggregate. The Standard and Poor’s 500 Index returned 7.6% over the 12-month period ending November 21, while more than 51% of the constituents of the index underperformed the benchmark. Hence, a random stock picking process will most likely lead to disappointment. At the same time, the 30 most favored mid-cap stocks by the best performing hedge funds monitored by Insider Monkey generated a return of 18% over the same time span. Of course, hedge funds do make wrong bets on some occasions and these get disproportionately publicized on financial media, but piggybacking their moves can beat the broader market on average. That’s why we are going to go over recent hedge fund activity in La Jolla Pharmaceutical Company (NASDAQ:LJPC) .

Is La Jolla Pharmaceutical Company (NASDAQ:LJPC) a buy right now? Hedge funds are altogether taking a bullish view. The number of bullish hedge fund positions that are disclosed in regulatory 13F filings rose by 1 lately. There were 9 hedge funds in our database with LJPC positions at the end of the previous quarter. The level and the change in hedge fund popularity aren’t the only variables you need to analyze to decipher hedge funds’ perspectives. A stock may witness a boost in popularity but it may still be less popular than similarly priced stocks. That’s why at the end of this article we will examine companies such as Sun Bancorp, Inc. NJ (NASDAQ:SNBC), Park Sterling Bank (NASDAQ:PSTB), and Brightcove Inc (NASDAQ:BCOV) to gather more data points.

Keeping this in mind, we’re going to take a gander at the latest action regarding La Jolla Pharmaceutical Company (NASDAQ:LJPC). 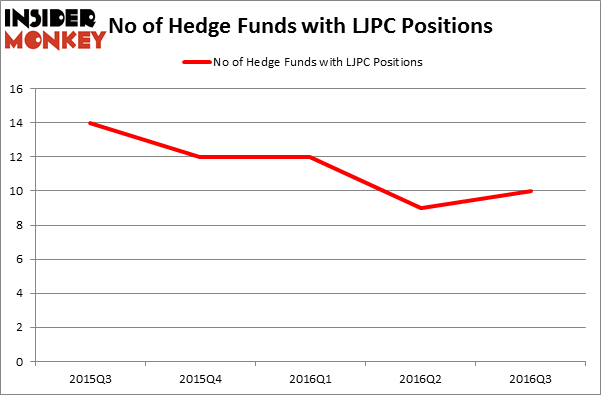 When looking at the institutional investors followed by Insider Monkey, Kevin C. Tang of Tang Capital Management holds the most valuable position in La Jolla Pharmaceutical Company (NASDAQ:LJPC). Tang Capital Management has a $75.9 million position in the stock, comprising 31.5% of its 13F portfolio. The second most bullish fund manager is Kevin Kotler of Broadfin Capital, with a $34.4 million position; the fund has 3.1% of its 13F portfolio invested in the stock. Remaining members of the smart money that hold long positions encompass Joseph Edelman’s Perceptive Advisors. We should note that none of these hedge funds are among our list of the 100 best performing hedge funds which is based on the performance of their 13F long positions in non-microcap stocks.

Now, key hedge funds have jumped into La Jolla Pharmaceutical Company (NASDAQ:LJPC) headfirst. Point State Capital established the largest position in La Jolla Pharmaceutical Company (NASDAQ:LJPC) which had $4.8 million invested in the company at the end of the quarter. Glenn Russell Dubin’s Highbridge Capital Management also made a $0.8 million investment in the stock during the quarter. The only other fund with a new position in the stock is Ken Griffin’s Citadel Investment Group.

Let’s check out hedge fund activity in other stocks – not necessarily in the same industry as La Jolla Pharmaceutical Company (NASDAQ:LJPC) but similarly valued. We will take a look at Sun Bancorp, Inc. NJ (NASDAQ:SNBC), Park Sterling Bank (NASDAQ:PSTB), Brightcove Inc (NASDAQ:BCOV), and Zoe’s Kitchen Inc (NYSE:ZOES). All of these stocks’ market caps are similar to LJPC’s market cap.

As you can see these stocks had an average of 10 hedge funds with bullish positions and the average amount invested in these stocks was $63 million. That figure was $157 million in LJPC’s case. Brightcove Inc (NASDAQ:BCOV) is the most popular stock in this table. On the other hand Sun Bancorp, Inc. NJ (NASDAQ:SNBC) is the least popular one with only 4 bullish hedge fund positions. La Jolla Pharmaceutical Company (NASDAQ:LJPC) is not the least popular stock in this group but hedge fund interest is just average. This is a slightly negative signal and we’d rather spend our time researching stocks that hedge funds are piling on. In this regard BCOV might be a better candidate to consider taking a long position in.