AllianceBernstein Holding LP (NYSE:AB) was in 9 hedge funds’ portfolios at the end of the third quarter of 2016. AB has experienced an increase in support from the world’s most successful money managers in recent months. There were 8 hedge funds in our database with AB holdings at the end of the previous quarter. At the end of this article we will also compare AB to other stocks including Rexnord Corp (NYSE:RXN), Pampa Energia S.A. (ADR) (NYSE:PAM), and BancorpSouth, Inc. (NYSE:BXS) to get a better sense of its popularity.

Heading into the fourth quarter of 2016, a total of 9 of the hedge funds tracked by Insider Monkey were bullish on this stock, up by 13% from the second quarter of 2016. By comparison, 10 hedge funds held shares or bullish call options in AB heading into this year. With hedge funds’ positions undergoing their usual ebb and flow, there exists a select group of notable hedge fund managers who were boosting their holdings considerably (or already accumulated large positions). 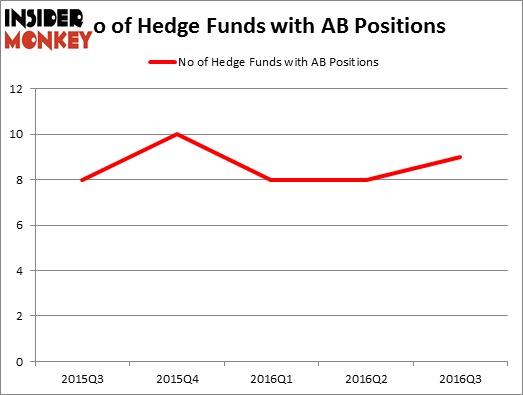 When looking at the institutional investors followed by Insider Monkey, Chuck Royce of Royce & Associates holds the most valuable position in AllianceBernstein Holding LP (NYSE:AB). Royce & Associates has a $10.1 million position in the stock. The second largest stake is held by Mario Gabelli of GAMCO Investors, with a $5.6 million position. Some other hedge funds and institutional investors that hold long positions comprise Sharif Siddiqui’s Alpenglow Capital, and Jim Simons’ Renaissance Technologies, which is one of the largest hedge funds in the world. We should note that none of these hedge funds are among our list of the 100 best performing hedge funds which is based on the performance of their 13F long positions in non-microcap stocks.