Published on February 17, 2016 at 1:45 pm by Sure Dividend in Dividend Stocks, News, Stock Analysis

HCP is not new to dividend increases. The company is the only REIT Dividend Aristocrat. HCP’s dividend history is below. 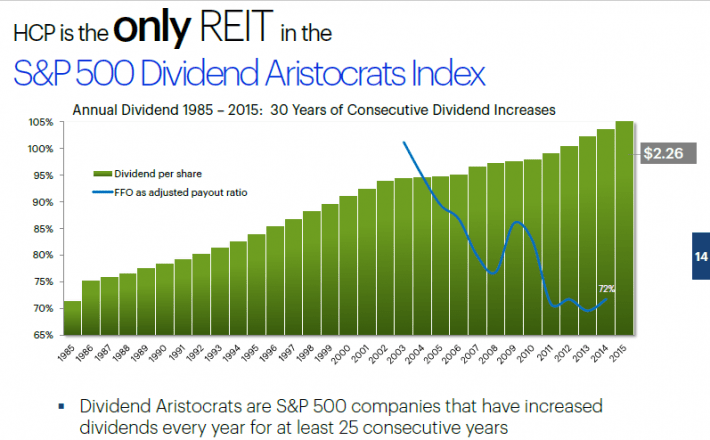 Among the funds tracked by Insider Monkey, HCP is an overlooked stock, in which only 11 funds reported holdings in the latest round of 13F filings. Moreover, during the fourth quarter, the number of investors with long positions slid by six. One of the HCP’s shareholders is billionaire Jim Simons’ Renaissance Technologies, which owns 1.72 million shares of the company as of the end of December.

“HCRMC’s 2016 forecast anticipates their normalized EBITDAR at $577 million before the temporary impact from the pending asset sales and legal and regulatory defense costs, which adjusted for the impact of these items is estimated to be $555 million. Furthermore, HCP reviewed sensitivities regarding certain key assumptions in HCRMC’s forecast, which primarily affected census, to arrive at a potential range of projected outcomes for HCRMC’s 2016 EBITDAR. HCP’s forecast of HCRMC’s 2016 EBITDAR ranges from $505 million to $555 million, resulting in a 2016 FCC range of 1.06x to 1.16x.”

Notice there is no mention of FFO (funds from operations) per share or FAD per share. These metrics are the standard for REITs. Instead the company focused on EBITDAR which is a far less useful measure. For reference, the company’s 2015 forecast is below:

The 2015 outlook was clear and straightforward. The 2016 outlook is vague and does not break out relevant numbers.

HCP’s management did discuss 2016 FFO per share numbers in its quarterly call:

The company’s payout ratio is creeping up, but the dividend is still safe.

HCP, Inc. (NYSE:HCP) is the only REIT Dividend Aristocrat.

I believe HCP to be a quality high yield business based on an analysis of the company’s operations and dividend history.

What stands out about HCP is its ability to pay rising dividends through the Great Recession – when many non-health care REITs struggled. The company has slowly reduced its payout ratio as well. The company is able to continue paying rising dividends because of management’s foresight to do so.

What has caused the company to struggle is changes in the health care industry. This is reducing demand for the company’s properties and hurting the bottom line.

It is very likely that HCP will maintain its dividend in 2016. I believe the company recover in the medium term as long-term growth drivers offset temporary troubles.